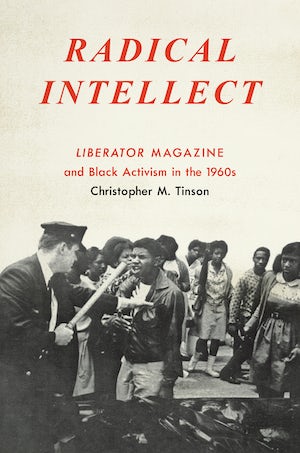 The rise of black radicalism in the 1960s was a result of both the successes and the failures of the civil rights movement. The movement’s victories were inspirational, but its failures to bring about structural political and economic change pushed many to look elsewhere for new strategies. During this era of intellectual ferment, the writers, editors, and activists behind the monthly magazine Liberator (1960–71) were essential contributors to the debate. In the first full-length history of the organization that produced the magazine, Christopher M. Tinson locates the Liberator as a touchstone of U.S.-based black radical thought and organizing in the 1960s. Combining radical journalism with on-the-ground activism, the magazine was dedicated to the dissemination of a range of cultural criticism aimed at spurring political activism, and became the publishing home to many notable radical intellectual-activists of the period, such as Larry Neal, Ossie Davis, Ruby Dee, Harold Cruse, and Askia Touré.

By mapping the history and intellectual trajectory of the Liberator and its thinkers, Tinson traces black intellectual history beyond black power and black nationalism into an internationalism that would shape radical thought for decades to come.

“Radical Intellect offers a valuable cultural and intellectual history of black radicalism and global freedom struggles in the 1960s.”--H-Net Reviews

“With Radical Intellect, Tinson has offered a compelling portrait of an intellectual and political community in struggle. He has filled a hole in our knowledge about the black liberation movement as we search for more inclusive narratives and more dynamic chronologies.”--American Historical Review

"An engaging examination. . . . Opens a window on a rich culture of political debate and intellectual exchange that is likely what many community-based intellectuals had in mind when they entered the university to build Black Studies."--Journal of African American History

“Deeply researched, carefully imagined, and organized intellectually. . . . A must-read for scholars of black history, the civil rights movement, and the 1960s era.”--Journal of Magazine Media

“Radical Intellect will no doubt stand as a major work of African American intellectual history and the definitive book about LCA and Liberator in years to come. . . . An important first step in examining the radical periodical culture of the 1960s on its own terms. Tinson is unmatched for the analytical prowess he brings to the Liberator archive, and he is remarkably adept at conveying the nuance of certain figures’ writing.”--American Periodicals