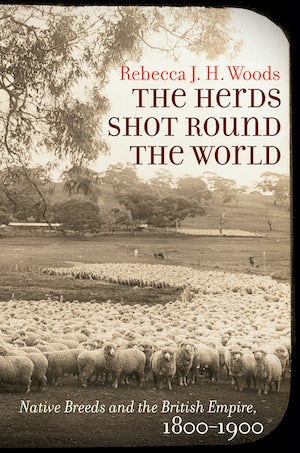 To purchase online via an independent bookstore, visit Bookshop.org
As Britain industrialized in the early nineteenth century, animal breeders faced the need to convert livestock into products while maintaining the distinctive character of their breeds. Thus they transformed cattle and sheep adapted to regional environments into bulky, quick-fattening beasts. Exploring the environmental and economic ramifications of imperial expansion on colonial environments and production practices, Rebecca J. H. Woods traces how global physiological and ecological diversity eroded under the technological, economic, and cultural system that grew up around the production of livestock by the British Empire. Attending to the relationship between type and place and what it means to call a particular breed of livestock “native,” Woods highlights the inherent tension between consumer expectations in the metropole and the ecological reality at the periphery.

Based on extensive archival work in the United Kingdom, New Zealand, and Australia, this study illuminates the connections between the biological consequences and the politics of imperialism. In tracing both the national origins and imperial expansion of British breeds, Woods uncovers the processes that laid the foundation for our livestock industry today.

“Elegantly written and a pleasure to read—a lavish sprinkling of quotations from primary sources contributes in no small measure to the enjoyment.”--Isis Review

“Woods brilliantly brings together threads from animal studies, agricultural history, and the history of capitalism in her original study of the colonial fauna of the British Empire.”--Environmental History

“Admirably innovative. . . . Woods has established that the subject of stock breeding has a place in the cultural history of the British Empire.”--American Historical Review

“Combining careful exposition with lively anecdotes, Woods has given us a fascinating and sustained discussion of the ideas surrounding livestock breeding as herds and flocks proliferated around the British Empire and became the base for major settler enterprises. Her approach is instructive for understanding imperial networks and their implications for today’s globalized world.”--William Beinart, University of Oxford

“With incredible reach, Woods brings together a diverse group of fields--from natural history to the economics of empire to the study of mechanical refrigeration and shipping--to reveal the long and complex relationship between livestock and place and what it means to call particular breeds ‘native.’”--Thomas R. Dunlap, author of In the Field, Among the Feathered