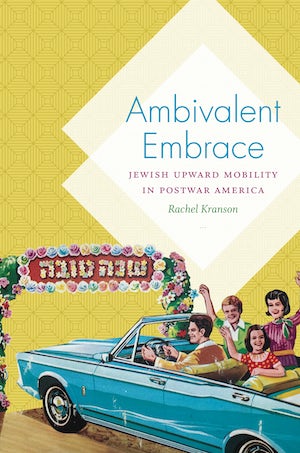 This new cultural history of Jewish life and identity in the United States after World War II focuses on the process of upward mobility. Rachel Kranson challenges the common notion that most American Jews unambivalently celebrated their generally strong growth in economic status and social acceptance during the booming postwar era. In fact, a significant number of Jewish religious, artistic, and intellectual leaders worried about the ascent of large numbers of Jews into the American middle class.

Kranson reveals that many Jews were deeply concerned that their lives—affected by rapidly changing political pressures, gender roles, and religious practices—were becoming dangerously disconnected from authentic Jewish values. She uncovers how Jewish leaders delivered jeremiads that warned affluent Jews of hypocrisy and associated “good” Jews with poverty, even at times romanticizing life in America’s immigrant slums and Europe’s impoverished shtetls. Jewish leaders, while not trying to hinder economic development, thus cemented an ongoing identification with the Jewish heritage of poverty and marginality as a crucial element in an American Jewish ethos.

Rachel Kranson is assistant professor of religious studies at the University of Pittsburgh.
For more information about Rachel Kranson, visit the Author Page.

“Kranson has tapped into a specific aspect of midcentury America and created an engaging text. Readers of Jewish studies, American history, and sociology will benefit from this worthwhile volume.”--Library Journal, starred review

“In her intriguing work Ambivalent Embrace, which focuses on the dilemmas of Jewish life in new suburban locales in the first decades after World War II, cultural historian Rachel Kranson teaches us that such well-founded apprehensions about that group’s continuity date back to the very outset of the increased acceptance of Jews in America.”--American Historical Review

"One of the most significant books on the question of Jewish American identity in the postwar period, Ambivalent Embrace will become my go-to history of American Jews of the second half of the century. The study accounts for so many unique patterns seen in twentieth-century Jewish life, from political liberalism and race relations to economics, demography--and, of course, Jewish identity." --Michael Alexander, author of Jazz Age Jews

"Ambivalent Embrace is terrific--well written and sharply analytical, it is an important work for our understanding of Jewish history and of American Jews today, and it offers a new portrait of the counterculture as a product of the postwar generation."--Kirsten Fermaglich, author of American Dreams and Nazi Nightmares