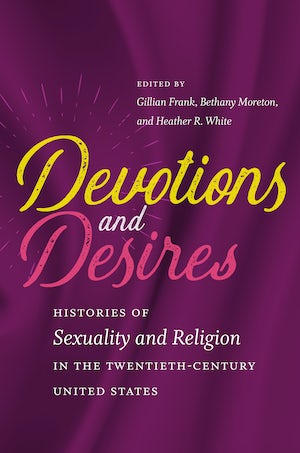 At a moment when “freedom of religion” rhetoric fuels public debate, it is easy to assume that sex and religion have faced each other in pitched battle throughout modern U.S. history. Yet, by tracking the nation’s changing religious and sexual landscapes over the twentieth century, this book challenges that zero-sum account of sexuality locked in a struggle with religion. It shows that religion played a central role in the history of sexuality in the United States, shaping sexual politics, communities, and identities. At the same time, sexuality has left lipstick traces on American religious history. From polyamory to pornography, from birth control to the AIDS epidemic, this book follows religious faiths and practices across a range of sacred spaces: rabbinical seminaries, African American missions, Catholic schools, pagan communes, the YWCA, and much more. What emerges is the shared story of religion and sexuality and how both became wedded to American culture and politics.

Gillian Frank is visiting fellow at the Center for the Study of Religion at Princeton University.
For more information about Gillian A. Frank, visit the Author Page.

Heather R. White is visiting assistant professor in religion and queer studies at the University of Puget Sound.
For more information about Heather R. White, visit the Author Page.

“This addition to work on religion and sexuality pushes us along—to think both at large scale and small about what has defined the United States, history, religion, and sexuality then and now. These moments matter.”--Journal of American History

“This edited volume brings together thirteen essays on the intersection of two historical fields that have more often stared awkwardly at each other from across the room than embraced in the same bed: religious history and the history of sexuality. . . . An essential starting point for an introduction . . . and an ideal launching pad for future work.”--Journal of Southern History

“One of the most coherent, focused editorial collections on religion in American history: the authors have common argumentative purpose, the essays are themselves equal in accomplishment and quality, and the vision of religion and sexuality in the twentieth-century United States is intelligible. This is a one-stop recalibration for historians of sexuality.”--Church History and Religious Culture

“The authors have exploded the myth that a monolithic, oppressive “religion” has been at odds with sexual liberalism in the twentieth century. In its place, they have left us with over a dozen rich case studies in which religious actors have reconfigured their theologies and communities to accommodate new sexualities.”--American Historical Review