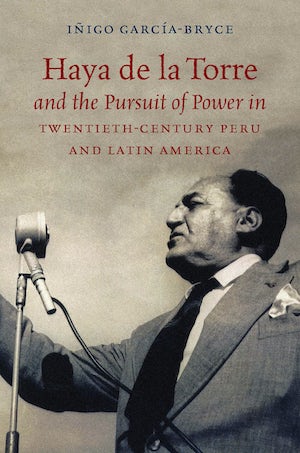 Like Fidel Castro and Che Guevara, Peruvian Víctor Raúl Haya de la Torre (1895–1979) was one of Latin America’s key revolutionary leaders, well known across national boundaries. Iñigo García-Bryce’s biography of Haya chronicles his dramatic political odyssey as founder of the highly influential American Popular Revolutionary Alliance (APRA), as a political theorist whose philosophy shifted gradually from Marxism to democracy, and as a seasoned opposition figure repeatedly jailed and exiled by his own government. García-Bryce spotlights Haya’s devotion to forging populism as a political style applicable on both the left and the right, and to his vision of a pan-Latin American political movement.

A great orator who addressed gatherings of thousands of Peruvians, Haya fired up the Aprismo movement, seeking to develop "Indo-America” by promoting the rights of Indigenous peoples as well as laborers and women. Steering his party toward the center of the political spectrum through most of the Cold War, Haya was elected president in 1962—but he was blocked from assuming office by the military, which played on his rumored homosexuality. Even so, Haya’s insistence that political parties must cultivate Indigenous roots and oppose violence as a means of achieving political power has left a powerful legacy across Latin America.

Iñigo García-Bryce, associate professor of history at New Mexico State University, is the author of Crafting the Republic.


For more information about Iñigo García-Bryce, visit the Author Page.

“García-Bryce has crafted an excellent analysis of Haya’s time and place. He situates the man and his politics within the larger Latin American twentieth century and shows how the various revolutionary movements worked with and learned from each. Most important, he shows the limits of Haya’s ideas in Peru and in Latin America.”--H-Net Reviews

“Why haven’t we had a serious biography of Haya de la Torre before? In illuminating and entertaining fashion, García-Bryce reveals the spectacular international presence wielded by Haya and his party, APRA, in the mid-twentieth century. Haya's exiles and writings take us from Peru to England to Mexico to Central America and beyond, leaving an enormous political legacy only now getting the attention it deserves.”—Charles F. Walker, University of California, Davis

“Haya de la Torre was to the first half of the twentieth century what the promise of Fidel Castro and Hugo Chávez was to the second half—García-Bryce illuminates the heretofore little known transnational dimensions of this premier leader. This full-blown political biography will be the indispensable study on the subject for some time to come.”—Peter F. Klarén, George Washington University