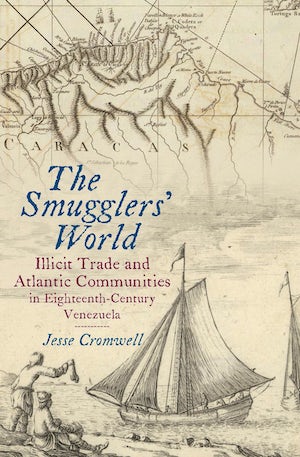 The Smugglers' World examines a critical part of Atlantic trade for a neglected corner of the Spanish Empire. Testimonies of smugglers, buyers, and royal officials found in Venezuelan prize court records reveal a colony enmeshed in covert commerce. Forsaken by the Spanish fleet system, Venezuelan colonists struggled to obtain European foods and goods. They found a solution in exchanging cacao, a coveted luxury, for the necessities of life provided by contrabandists from the Dutch, English, and French Caribbean.

Jesse Cromwell paints a vivid picture of the lives of littoral peoples who normalized their subversions of imperial law. Yet laws and borders began to matter when the Spanish state cracked down on illicit commerce in the 1720s as part of early Bourbon reforms. Now successful merchants could become convict laborers just as easily as enslaved Africans could become free traders along the unruly coastlines of the Spanish Main. Smuggling became more than an economic transaction or imperial worry; persistent local need elevated the practice to a communal ethos, and Venezuelans defended their commercial autonomy through passive measures and even violent political protests. Negotiations between the Spanish state and its subjects over smuggling formed a key part of empire making and maintenance in the eighteenth century.

Jesse Cromwell is associate professor of history at the University of Mississippi.
For more information about Jesse Cromwell, visit the Author Page.

“Provides a well-written and thoroughly researched model . . . . for rethinking empire, trade, and society in the wider Caribbean. Smuggling connected individuals across imperial divides throughout the early modern period and Cromwell moves us beyond that truism and toward a deeper understanding of what that actually meant.”--H-Net Reviews

“Cromwell dedicates great effort to understanding and diagnosing the society that gave rise to the contraband so characteristic of eighteenth-century colonial Venezuela. He presents a complex picture of a society supported by illegal, corrupt behaviors and a peculiar morality that connected Venezuelans and Europeans in the Caribbean in unsuspected, sustained, and creative ways. . . . Extensive, diverse, and often novel. . . . This is a rich history of contraband in colonial Venezuela.”--Hispanic American Historical Review

“A deeply impressive work of social history. Jesse Cromwell’s vivid accounting of the era is meticulous and exhaustive. . . . Cromwell has produced a significant contribution to the fields of Latin American and Atlantic history, in which it is certain to become required reading.”--New West Indian Guide

“Jesse Cromwell’s insightful new history of smuggling in eighteenth-century Venezuela. . . . Presents a vibrant picture of Venezuelan economic life and the ways in which the colony connected to the Spanish empire. . . . Cromwell has provided researchers interested in comparative questions with an unmatched look at early modern smuggling.”--Criminal Law and Criminal Justice Books

“The Smugglers’ World is a well-research[ed], informed, and academically inclined study. Talented smugglers endeavoured to remain hidden from the historical record, but Cromwell has admirably discovered their networks, both at sea and on land, and told their stories.”--The Northern Mariner

"In this deeply researched and theoretically sophisticated history of smuggling and its enemies, Jesse Cromwell brings tacitly accepted illicit trade into sharp and dramatic relief. Venezuelans of all types found a sense of 'community in criminality' by resisting state actors' attempts to monopolize local cacao. This novel argument adds much to the new history of corruption in the Iberian empires and to the Bourbon reforms and their consequences. It also says a lot about that old devil, chocolate."--Kris E. Lane, Tulane University