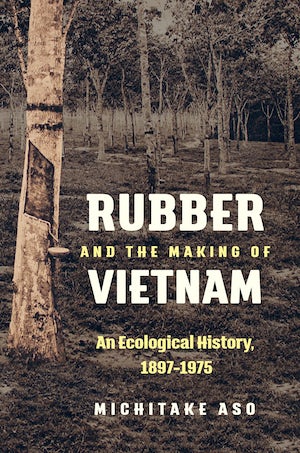 Dating back to the nineteenth-century transplantation of a latex-producing tree from the Amazon to Southeast Asia, rubber production has wrought monumental changes worldwide. During a turbulent Vietnamese past, rubber transcended capitalism and socialism, colonization and decolonization, becoming a key commodity around which life and history have revolved. In this pathbreaking study, Michitake Aso narrates how rubber plantations came to dominate the material and symbolic landscape of Vietnam and its neighbors, structuring the region’s environment of conflict and violence. Tracing the stories of agronomists, medical doctors, laborers, and leaders of independence movements, Aso demonstrates how postcolonial socialist visions of agriculture and medicine were informed by their colonial and capitalist predecessors in important ways. As rubber cultivation funded infrastructural improvements and the creation of a skilled labor force, private and state-run plantations became landscapes of oppression, resistance, and modernity.

Synthesizing archival material in English, French, and Vietnamese, Aso uses rubber plantations as a lens to examine the entanglements of nature, culture, and politics and demonstrates how the demand for rubber has impacted nearly a century of war and, at best, uneasy peace in Vietnam.

Michitake Aso is assistant professor of history at the University at Albany, SUNY.
For more information about Michitake Aso, visit the Author Page.

“Uncovers a captivating story of imperial imposition . . . Brilliantly delves into the ecological and technological aspects of the production of latex in southern Vietnam.”--Environmental History

“Ambitious in scope and extensively researched. . . . Exemplary of the potential of interdisciplinary history to produce a better understanding of the world of the past as well as the future.”--The Journal of Interdisciplinary History

“Nuanced and comprehensive . . . The book covers all major aspects of the rubber production, including science, commerce, governance, healthcare, as well as the position of rubber plantations in the prolonged wars of Vietnam. More interestingly, Aso discusses all these aspects through the lens of an ecological perspective, which clarifies the impacts of rubber on the society, economy, culture, and politics.”--Southeast Asian Studies

“Aso’s book is a welcome addition to the prolific publications on twentieth-century Vietnam that have appeared over the last two decades. It is also one of the few works that deals with the environmental history of the French colonial empire in Asia.”--H-Net Reviews

“With exceptional depth and intellectual creativity, Aso offers a fascinating view of the twentieth-century history of science and nation building in Vietnam from the perspective of the rubber plantation.”--David Biggs, University of California, Riverside

“This superb study offers a subtle, multivalent assessment of the complex, intersectional--and sometimes unpredictable--ways in which people, nature, ideology, and power interacted in the creation and evolution of industrialized rubber production in twentieth-century Indochina.”--Peter Coclanis, University of North Carolina at Chapel Hill