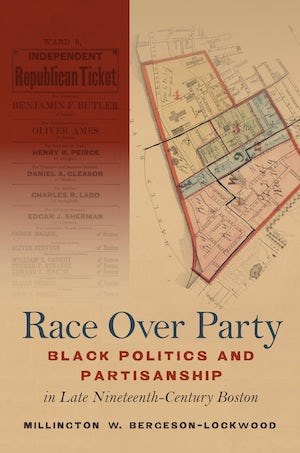 In late nineteenth-century Boston, battles over black party loyalty were fights over the place of African Americans in the post–Civil War nation. In his fresh in-depth study of black partisanship and politics, Millington W. Bergeson-Lockwood demonstrates that party politics became the terrain upon which black Bostonians tested the promise of equality in America’s democracy. Most African Americans remained loyal Republicans, but Race Over Party highlights the actions and aspirations of a cadre of those who argued that the GOP took black votes for granted and offered little meaningful reward for black support. These activists branded themselves “independents,” forging new alliances and advocating support of whichever candidate would support black freedom regardless of party.

By the end of the century, however, it became clear that partisan politics offered little hope for the protection of black rights and lives in the face of white supremacy and racial violence. Even so, Bergeson-Lockwood shows how black Bostonians’ faith in self-reliance, political autonomy, and dedicated organizing inspired future generations of activists who would carry these legacies into the foundation of the twentieth-century civil rights movement.

“Thought-provoking. . . . Expose[s] the constraints that the two-party system imposed on even the most determined northern black political actors.”--American Historical Review

“[A] thought-provoking book . . . Bergeson-Lockwood’s careful attention to detail and his historiographical contribution . . . will appeal to a scholarly as well as a popular audience.”--Historical Journal of Massachusetts

“Bergeson-Lockwood provides an exciting new framework for understanding northern black politics during the Reconstruction era. . . . Race over Party tells the story of Boston’s black independents with a keen eye for detail and a deep empathy for the difficult political choices these leaders made to build a better future for their community.”--Journal of the Civil War Era

“Magnificently researched . . . one of those instant classics that we may look back upon for having forever changed the historiography of Black Boston.” --H-SHGAPE

"This is a much-needed book. It adds to our understanding of African American politics in the age of Emancipation, but more important, it shifts the focus from the South to the North in the post-Emancipation period, exposing how African Americans in the North used their particular politics to respond to rapidly changing social and political conditions."--Shawn Alexander, University of Kansas