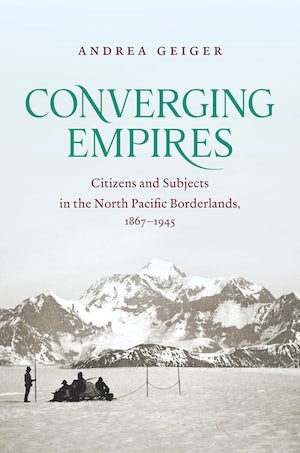 To purchase online via an independent bookstore, visit Bookshop.org
Making a vital contribution to our understanding of North American borderlands history through its examination of the northernmost stretches of the U.S.-Canada border, Andrea Geiger highlights the role that the North Pacific borderlands played in the construction of race and citizenship on both sides of the international border from 1867, when the United States acquired Russia’s interests in Alaska, through the end of World War II. Imperial, national, provincial, territorial, reserve, and municipal borders worked together to create a dynamic legal landscape that both Indigenous and non-Indigenous people negotiated in myriad ways as they traversed these borderlands. Adventurers, prospectors, laborers, and settlers from Europe, Canada, the United States, Latin America, and Asia made and remade themselves as they crossed from one jurisdiction to another.

Within this broader framework, Geiger pays particular attention to the ways in which Japanese migrants and the Indigenous people who had made this borderlands region their home for millennia—Tlingit, Haida, and Tsimshian among others—negotiated the web of intersecting boundaries that emerged over time, charting the ways in which they infused these reconfigured national, provincial, and territorial spaces with new meanings.

Andrea Geiger is author of the award-winning Subverting Exclusion: Transpacific Encounters with Race, Caste, and Borders, 1885–1928.
For more information about Andrea Geiger, visit the Author Page.

"From the meeting of Indigenous communities and Japanese migrants to the expulsion of Japanese workers along the U.S.-Canada border to the maritime encounters among fishers at sea, Converging Empires is a tour of borderland creation, reformation, and consequence. A lively and essential borderlands read.”— Bathsheba Demuth, author of Floating Coast: An Environmental History of the Bering Strait

“This sophisticated and surprising history uses the convergence of Indigenous peoples and Japanese immigrants in the colonial empires of the Northern Pacific to reveal the power—and limits—of law in creating racialized categories of immigrant and indigene. A model of how to write history.”— Richard White, author of The Republic for Which It Stands: The United States during Reconstruction and the Gilded Age, 1865–1896

“This is the first sustained exploration of the history of this important borderland, and Geiger is one of the few historians who can pull off such a study. She shows how and why this history matters.”—Lissa Wadewitz, Linfield College