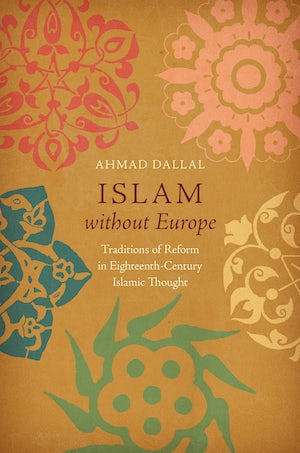 To purchase online via an independent bookstore, visit Bookshop.org
Replete with a cast of giants in Islamic thought and philosophy, Ahmad S. Dallal’s pathbreaking intellectual history of the eighteenth-century Muslim world challenges stale views of this period as one of decline, stagnation, and the engendering of a widespread fundamentalism. Far from being moribund, Dallal argues, the eighteenth century--prior to systematic European encounters--was one of the most fertile eras in Islamic thought.

Across vast Islamic territories, Dallal charts in rich detail not only how intellectuals rethought and reorganized religious knowledge but also the reception and impact of their ideas. From the banks of the Ganges to the shores of the Atlantic, commoners and elites alike embraced the appeals of Muslim thinkers who, while preserving classical styles of learning, advocated for general participation by Muslims in the definition of Islam. Dallal also uncovers the regional origins of most reform projects, showing how ideologies were forged in particular sociopolitical contexts. Reformists’ ventures were in large part successful--up until the beginnings of European colonization of the Muslim world. By the nineteenth century, the encounter with Europe changed Islamic discursive culture in significant ways into one that was largely articulated in reaction to the radical challenges of colonialism.

Ahmad S. Dallal is dean of Georgetown University Qatar and author of Islam, Science, and the Challenge of History.
For more information about Ahmad S. Dallal, visit the Author Page.

“…a thoughtful and stimulating book, based on wide reading in the works of a number of important eighteenth-century thinkers.” – Journal of the American Oriental Society

“Dallal’s reading of influential eighteenth-century reformers is learned, accessible, and evocative, and it provides a remarkably illuminating vantage from which to understand the significance of a complex epoch. A superb study.”--Muhammad Qasim Zaman, author of Modern Islamic Thought in a Radical Age

“A bold and carefully crafted argument showcasing the intellectual originality of significant eighteenth-century Muslim figures in the realm of religious knowledge in multiple regions of the world. Dallal sheds light on a long-standing debate on the role of Islamic reform before the political and cultural encounter with Europe in Muslim lands. A refreshing contribution to the intellectual history and historiography of Islam at the dawn of Western modernity in Muslim domains.”--Ebrahim Moosa, author of What Is a Madrasa? and Ghazālī and the Poetics of Imagination