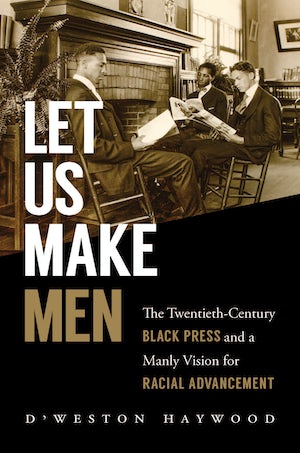 During its golden years, the twentieth-century black press was a tool of black men's leadership, public voice, and gender and identity formation. Those at the helm of black newspapers used their platforms to wage a fight for racial justice and black manhood. In a story that stretches from the turn of the twentieth century to the rise of the Black Power movement, D'Weston Haywood argues that black people's ideas, rhetoric, and protest strategies for racial advancement grew out of the quest for manhood led by black newspapers.

This history departs from standard narratives of black protest, black men, and the black press by positioning newspapers at the intersections of gender, ideology, race, class, identity, urbanization, the public sphere, and black institutional life. Shedding crucial new light on the deep roots of African Americans' mobilizations around issues of rights and racial justice during the twentieth century, Let Us Make Men reveals the critical, complex role black male publishers played in grounding those issues in a quest to redeem black manhood.


For more information about D'Weston Haywood, visit the Author Page.

"For readers interested in the history of the black freedom struggle, this work delivers an alternative and important view of the actors involved in producing the black press."--Library Journal, Starred Review

“Clearly articulates how gender indelibly shapes racial justice and the Black Press’ historical role in advancing it. Readers will benefit from Haywood’s careful deconstructions of the complex, and at times, competing “manly visions” offered by Black newspapermen.”--Black Perspectives

“Covers new ground on the twentieth-century African American struggle for civil rights to make important, well-crafted points about gender, race, and the media.”--Annals of Iowa

“Haywood’s illuminating study. . . . Opens up the African American freedom struggle to more fine-grained analysis. Let Us Make Men shows how newspaper editors’ conceptions of uplift and masculinity, race and resistance, changed depending on calculations of strategy, audience, and historical context. It further highlights the interplay between mainstream and dissident voices in the black press itself—a dynamic informed not only by gender ideology but also by the politics of class, social movement, and generational cohort.”--Reception