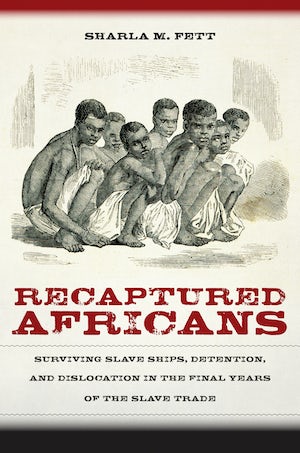 In the years just before the Civil War, during the most intensive phase of American slave-trade suppression, the U.S. Navy seized roughly 2,000 enslaved Africans from illegal slave ships and brought them into temporary camps at Key West and Charleston. In this study, Sharla Fett reconstructs the social world of these “recaptives” and recounts the relationships they built to survive the holds of slave ships, American detention camps, and, ultimately, a second transatlantic voyage to Liberia. Fett also demonstrates how the presence of slave-trade refugees in southern ports accelerated heated arguments between divergent antebellum political movements--from abolitionist human rights campaigns to slave-trade revivalism--that used recaptives to support their claims about slavery, slave trading, and race.

By focusing on shipmate relations rather than naval exploits or legal trials, and by analyzing the experiences of both children and adults of varying African origins, Fett provides the first history of U.S. slave-trade suppression centered on recaptive Africans themselves. In so doing, she examines the state of “recaptivity” as a distinctive variant of slave-trade captivity and situates the recaptives’ story within the broader diaspora of “Liberated Africans” throughout the Atlantic world.

"Provide[s] telling accounts and analysis of the ways that Americans were forced to move from abstractions to actions regarding the slave trade and issues of race. In that, it speaks to our own day."--Library Journal

"Presents a revealing view of the debates over slavery, race, and empire in the years immediately preceding a war to which these issues were central. . . . Emphasizes the suffering and resilience of the recaptives, restoring agency to people whose experiences are too often seen as abstractions."--Publishers Weekly, starred review

“Riveting narrative of untold story of slavery. . . . Groundbreaking and firmly places itself in the category of entirely new information.”--Civil War News

“Describe[s] a crucial link in the chain of the history of racism that stretches between the transatlantic slave trade and modern methods of viewing, controlling, incarcerating, and disposing of black lives.”--The Journal of Southern History

“This book addresses a little-researched subject: the plight of recaptives who found themselves in the United States after the Navy removed them from four illegal slave ships in the mid-nineteenth century. With great historical imagination and a tremendous grasp of scholarship focused on both sides of the Atlantic, Fett makes the most of limited data to tell a story about the enslaved themselves--their strategies, their desires, and their suffering.”--Walter Hawthorne, Michigan State University

“Recaptured Africans is our first real chance to explore in depth the cultural and political meaning of African recaptives in the American context. At the same time, Fett also foregrounds the experience of the recaptives who were penned up in American camps and stockades, farmed out to American enslavers, and shipped off to Liberia and other places very different from those that they had left. The tragedy of the disruption, suffering, and, often, death undergone by the thousands of (mostly young) recaptives is nowhere explored with the same kind of subtle but powerful emotional depth we see here.”—Edward E. Baptist, Cornell University