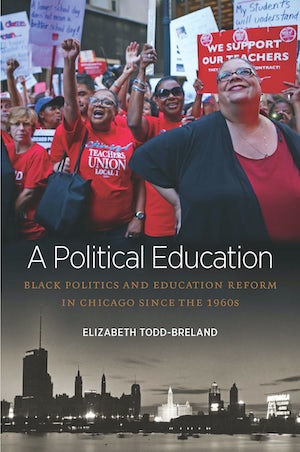 In 2012, Chicago’s school year began with the city’s first teachers' strike in a quarter century and ended with the largest mass closure of public schools in U.S. history. On one side, a union leader and veteran black woman educator drew upon organizing strategies from black and Latinx communities to demand increased school resources. On the other side, the mayor, backed by the Obama administration, argued that only corporate-style education reform could set the struggling school system aright. The stark differences in positions resonated nationally, challenging the long-standing alliance between teachers’ unions and the Democratic Party.

Elizabeth Todd-Breland recovers the hidden history underlying this battle. She tells the story of black education reformers' community-based strategies to improve education beginning during the 1960s, as support for desegregation transformed into community control, experimental schooling models that pre-dated charter schools, and black teachers' challenges to a newly assertive teachers' union. This book reveals how these strategies collided with the burgeoning neoliberal educational apparatus during the late twentieth century, laying bare ruptures and enduring tensions between the politics of black achievement, urban inequality, and U.S. democracy.

“Todd-Breland skillfully establishes the major activists and players in the major movements and uses their biographies to illustrate broad context, changing social currents, and the shifts in power and discourse over time. . . . [Her] clear-eyed yet sympathetic portrayal of the movement is a vital and refreshing approach.”--South Side Weekly

“Todd-Breland’s critically acclaimed book . . . is especially impressive in its fluent engagement with numerous strands of the historical literature. A Political Education not only engages with but also contributes to the fields of urban history, Black History, labour history, women’s history, educational history, political history, and intellectual history. . . . It is precisely because the book is about making connections and showing continuity that Todd-Breland can masterfully take her readers around a nebula of educational reform movements.”--Historical Studies in Education

"This is a brilliant and necessary exposé of a collision that we all know too little about. Using Chicago as a case study, Elizabeth Todd-Breland shares the devastating collision between Black community-based education reformers and corporate education reformers since the 1960s. Black education organizing comes alive--and fights on and on against all odds--in this expertly framed and vividly told book."--Ibram X. Kendi, National Book Award-winning author of Stamped from the Beginning

"This insightful, astute, sweeping history offers an extraordinary account of black politics and advocacy regarding educational reform and justice over the last half century. It offers a rich, nuanced, deeply researched case study of one major American city, and yet its findings and major themes have national significance. Capturing a range of voices and perspectives in an engaging and cohesive narrative, it is the best study of African Americans' relation to neoliberalism by any historian that I am aware of."--Martha Biondi, Northwestern University

"For half a century Chicago, the third largest city in the United States, has played an outsized role in the ongoing debates concerning race and public education. Elizabeth Todd-Breland is the first historian to weave together those decades of reform and retreat and reform again. Todd-Breland brilliantly articulates the dynamic interplay of municipal and state institutions in combination with the actions of ordinary Black women, students, and teachers to portray the richness and complexity of the struggle for the right to a decent public education. Deeply researched, sharply argued and beautifully narrated, Todd-Breland demonstrates the centrality of Chicago in comprehending the tumultuous history of public education in the United States."--Keeanga-Yamahtta Taylor, author of From BlackLivesMatter to Black Liberation