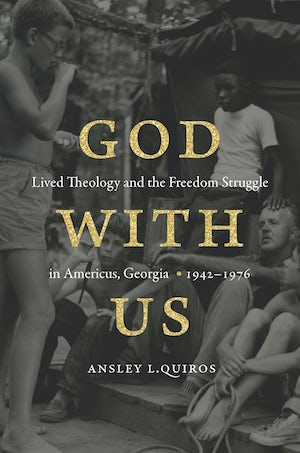 For many, the struggle over civil rights was not just about lunch counters, waiting rooms, or even access to the vote; it was also about Christian theology. Since both activists and segregationists ardently claimed that God was on their side, racial issues were imbued with religious meanings from all sides. Whether in the traditional sanctuaries of the major white Protestant denominations, in the mass meetings in black churches, or in Christian expressions of interracialism, southerners resisted, pursued, and questioned racial change within various theological traditions.

God with Us examines the theological struggle over racial justice through the story of one southern town--Americus, Georgia--where ordinary Americans sought and confronted racial change in the twentieth century. Documenting the passion and virulence of these contestations, this book offers insight into how midcentury battles over theology and race affected the rise of the Religious Right and indeed continue to resonate deeply in American life.

Ansley L. Quiros is an assistant professor of history at the University of North Alabama.
For more information about Ansley L. Quiros, visit the Author Page.

“A valuable resource for movement historians, practical theologians, and sociologists of American religion . . . A significant attempt to contextualize the local Americus conflict within the larger movement and white resistance to it.”—Sociology of Religion

“Rigorously researched, passionately written, and historically nuanced, God with Us: Lived Theology and the Freedom Struggle in Americus, Georgia, 1942 – 1976 contributes to our understanding of the religious forces at play in the South during the mid-twentieth-century phase of the long black freedom struggle.”—Journal of Southern History

“Both a compelling read and a valuable resource, God with Us is well-researched, well-written, and voluminously documented. The intersections it describes—between Koininia Farm and the surrounding community, between the SNCC and SCLC and the freedom movements in Americus and Albany, between non-violent direct action and random murder, between Clarence Jordan and Martin Luther King, Jr., —make this book a signal contribution to our understanding of the lived theologies that animated both the civil rights movement and those who rejected it.”—The Journal of Southern Religion

“The book’s strength is Quiros’s ability to use the national civil rights movement as a backdrop for local people and events. She reminds readers that the freedom struggle occurred beyond the streets of Birmingham and Albany. Instead, it occurred in small towns such as Americus, and its implications reach beyond the successes and failures of the movement in the 1960s.”—Journal of American History

"A fascinating history of an important but understudied place in the civil rights movement with a remarkable degree of understanding for the people."—H-Slavery

"A pathbreaking book.. . . Previous studies of the civil rights movement—some groundbreaking in their own ways—have discussed the roles of religion in interracial communalism, the Black freedom struggle, or white massive resistance. Yet historians have typically treated these topics separately. By focusing on lived theology in Americus, Georgia, Ansley L. Quiros is able to provide a clearer understanding of the competing Christian orthodoxies that gave rise to three distinct responses to the Black freedom struggle and, importantly, their interactions with each other."—American Historical Review