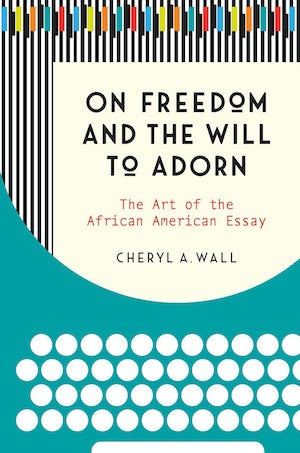 Although they have written in various genres, African American writers as notable and diverse as W. E. B. Du Bois, James Baldwin, and Alice Walker have done their most influential work in the essay form. The Souls of Black Folk, The Fire Next Time, and In Search of Our Mothers' Gardens are landmarks in African American literary history. Many other writers, such as Ralph Ellison, Zora Neale Hurston, James Weldon Johnson, and Richard Wright, are acclaimed essayists but achieved greater fame for their work in other genres; their essay work is often overlooked or studied only in the contexts of their better-known works. Here Cheryl A. Wall offers the first sustained study of the African American essay as a distinct literary genre.

Beginning with the sermons, orations, and writing of nineteenth-century men and women like Frederick Douglass who laid the foundation for the African American essay, Wall examines the genre's evolution through the Harlem Renaissance. She then turns her attention to four writers she regards as among the most influential essayists of the twentieth century: Baldwin, Ellison, June Jordan, and Alice Walker. She closes the book with a discussion of the status of the essay in the twenty-first century as it shifts its medium from print to digital in the hands of writers like Ta-Nehisi Coates and Brittney Cooper. Wall's beautifully written and insightful book is nothing less than a redefinition of how we understand the genres of African American literature.

Cheryl A. Wall is the Board of Governors Zora Neale Hurston Professor of English at Rutgers University and author of Worrying the Line.
For more information about Cheryl A. Wall, visit the Author Page.

"A pathbreaking work of scholarship, invigorating interest in the essay as a portal to some of the most pressing issues of race, culture, and politics across history, including our present time."--Gene Andrew Jarrett, New York University

"Beautifully written and compellingly argued, this welcome and necessary book rescues the genre of the essay from the margins of our discussions about African American intellectual and cultural production."--Farah J. Griffin, Columbia University