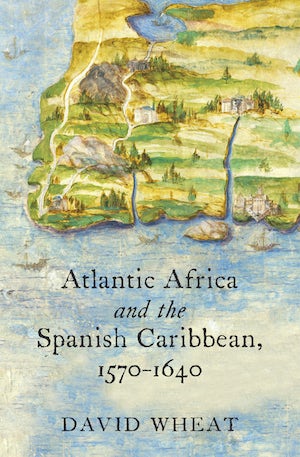 This work resituates the Spanish Caribbean as an extension of the Luso-African Atlantic world from the late sixteenth to the mid-seventeenth century, when the union of the Spanish and Portuguese crowns facilitated a surge in the transatlantic slave trade. After the catastrophic decline of Amerindian populations on the islands, two major African provenance zones, first Upper Guinea and then Angola, contributed forced migrant populations with distinct experiences to the Caribbean. They played a dynamic role in the social formation of early Spanish colonial society in the fortified port cities of Cartagena de Indias, Havana, Santo Domingo, and Panama City and their semirural hinterlands.

David Wheat is the first scholar to establish this early phase of the "Africanization" of the Spanish Caribbean two centuries before the rise of large-scale sugar plantations. With African migrants and their descendants comprising demographic majorities in core areas of Spanish settlement, Luso-Africans, Afro-Iberians, Latinized Africans, and free people of color acted more as colonists or settlers than as plantation slaves. These ethnically mixed and economically diversified societies constituted a region of overlapping Iberian and African worlds, while they made possible Spain's colonization of the Caribbean.

“Because Wheat's capacity to tell such nuanced and new stories is so meticulously buttressed by his sources that it leaves readers wanting him to go even further. . . . A vital contribution to the fields of Black/African history, Caribbean history, and early modern history more broadly.”--Reviews in American History

“Expertly and imaginatively transcends the conventional parameters not just of 'Latin American' and of 'Atlantic' history but also of the conceptual conventions of studying 'slavery' itself, as such. Do not miss it.”--Slavery & Abolition

"[An] exceptional study that explains a misunderstood period in the early history of post-contact colonies in the Spanish Caribbean. Highly recommended."--Choice

“Wheat’s innovative and deeply-researched book contributes to a growing body of work aimed at re-conceptualizing the Atlantic World and the roles of African people within it.”--Almanack

“[A] unique view into the archives and into a key but only partially understood early colonial period in this region [that] will interest both scholars of Iberian colonization and imperialism and students learning how to trace western Africa's influence on the Spanish Caribbean.”--The Americas

“Extremely well documented and tightly argued. . . . A signal contribution that should reframe scholarly debates about slavery in the Caribbean for some time to come.”--H-Net Reviews