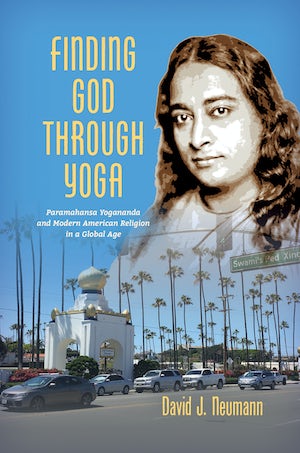 Paramahansa Yogananda (1893–1952), a Hindu missionary to the United States, wrote one of the world’s most highly acclaimed spiritual classics, Autobiography of a Yogi, which was first published in 1946 and continues to be one of the best-selling spiritual philosophy titles of all time. In this critical biography, David Neumann tells the story of Yogananda’s fascinating life while interpreting his position in religious history, transnational modernity, and American culture. Beginning with Yogananda’s spiritual investigations in his native India, Neumann tells how this early “global guru” emigrated to the United States in 1920 and established his headquarters, the Self-Realization Fellowship, in Los Angeles, where it continues today.

Preaching his message of Hindu yogic philosophy in a land that routinely sent its own evangelists to India, Yogananda was fueled by a religious nationalism that led him to conclude that Hinduism could uniquely fill a spiritual void in America and Europe. At the same time, he embraced a growing belief that Hinduism’s success outside South Asia hinged on a sincere understanding of Christian belief and practice. By “universalizing” Hinduism, Neumann argues, Yogananda helped create the novel vocation of Hindu yogi evangelist, generating fresh connections between religion and commercial culture in a deepening American religious pluralism.

“Neumann seeks to provide a balanced perspective, presenting Yogananda both as spiritual and religious—as a manwho sought to lead people to spiritual enlightenment and to authentic encounters with God.”--Choice Reviews

“Exceptional on many accounts. . . . Wonderfully written. . . . A powerful and insightful scholarly account that reframes Paramahansa Yogananda in thought-provoking ways that will undoubtedly intrigue scholarly and lay audiences alike.”--Southern California Quarterly

“As the first scholarly biography of Yogananda, Finding God through Yoga makes several important contributions to our understanding of religion, race, and gender in early twentieth-century California and the United States. . . . This extensively researched and evenhanded book should be read by historians interested in the growth of yoga in America, the spread of transnational Hinduism, and the contours of religio-racial diversity in Southern California.”--California History

"A well-researched, engaging biography of a historically significant, previously understudied Indian American Hindu yoga guru, Paramahansa Yogananda, known as the Father of Yoga in the West. . . . This book will be of great use to historians of yoga, transnational religions, and globalization in the twentieth and twenty-first centuries."--Journal of American History

"Neumann is to be applauded on this fine work of scholarship in revealing the impact of a yogic consciousness on the world outside of India and the contribution of Yogananda in it."--Western Historical Quarterly

"Offers an important counterpoint to the dominant historiography of both Yoga and the evangelical missionary work of adherents of Eastern religions."--World History Bulletin