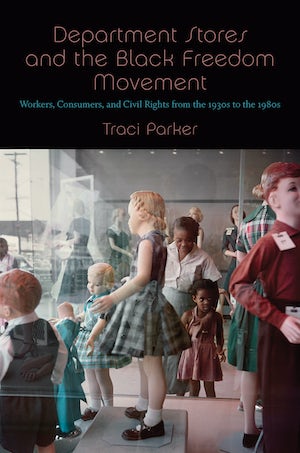 In this book, Traci Parker examines the movement to racially integrate white-collar work and consumption in American department stores, and broadens our understanding of historical transformations in African American class and labor formation. Built on the goals, organization, and momentum of earlier struggles for justice, the department store movement channeled the power of store workers and consumers to promote black freedom in the mid-twentieth century. Sponsoring lunch counter sit-ins and protests in the 1950s and 1960s, and challenging discrimination in the courts in the 1970s, this movement ended in the early 1980s with the conclusion of the Sears, Roebuck, and Co. affirmative action cases and the transformation and consolidation of American department stores. In documenting the experiences of African American workers and consumers during this era, Parker highlights the department store as a key site for the inception of a modern black middle class, and demonstrates the ways that both work and consumption were battlegrounds for civil rights.

Traci Parker is assistant professor of Afro-American studies at University of Massachusetts, Amherst.
For more information about Traci Parker, visit the Author Page.

"Sheds light on the intricacies and impacts of African Americans' attempts to be afforded the right to work and shop at established stores. Wonderfully detailed."--Library Journal

“Parker draws on government, social movement, and private sector documents along with periodicals and oral histories to show African Americans in a dozen northern and southern cities subverting ‘this ambiguous and contradictory space’ of retail.”--Choice

“The historiographical debate surrounding the periodization and economic dimensions of the Black Freedom Movement is both well worn and unsettled. . . . Tracy Parker skillfully and importantly expands the scope of this debate.”--North Carolina Historical Review

“Parker succeeds in bringing the department store as a significant political and cultural space into larger ways of understanding black subjectivity and citizenship. . . . Thanks to Parker, department stores will never again be passing references—mere scenery—for the larger historical drama of the modern Black Freedom Movement. . . . They have become places in which to see the main show.”--Journal of African American History

"In this fascinating book, Traci Parker convinces us that the department store of the twentieth century was far from a frivolous place. Rather it was a site as central to African American workers’ and consumers’ struggle for equality as the better-known factory floor and voting booth."--Lizabeth Cohen, Harvard University

"This is a powerful and largely untold story. Parker masterfully captures the distinct yet intertwined fates of worker and consumer rights."--Victoria W. Wolcott, State University of New York at Buffalo