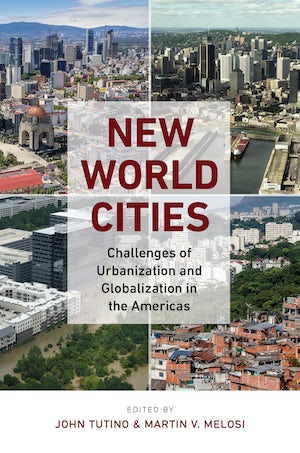 For millennia, urban centers were pivots of power and trade that ruled and linked rural majorities. After 1950, explosive urbanization led to unprecedented urban majorities around the world. That transformation--inextricably tied to rising globalization--changed almost everything for nearly everybody: production, politics, and daily lives. In this book, seven eminent scholars look at the similar but nevertheless divergent courses taken by Mexico City, Rio de Janeiro, Buenos Aires, Montreal, Los Angeles, and Houston in the twentieth century, attending to the challenges of rapid growth, the gains and limits of popular politics, and the profound local effects of a swiftly modernizing, globalizing economy. By exploring the rise of these six cities across five nations, New World Cities investigates the complexities of power and prosperity, difficulty and desperation, while reckoning with the social, cultural, and ethnic dynamics that mark all metropolitan areas.

John Tutino is professor of history and international affairs and director of the Americas Initiative at Georgetown University.
For more information about John Tutino, visit the Author Page.

Martin V. Melosi is Cullen Emeritus Professor and founding director of the Center for Public History at the University of Houston.
For more information about Martin V. Melosi, visit the Author Page.

“New World Cities successfully makes the case that differences between North and South American cities should be measured in degree, not kind.”--Hispanic American Historical Review

"New World Cities is bold, important, and novel--such a study makes a unique and significant contribution to historical scholarship on the city in the Americas, one of the most urbanized parts of the world."--James Brennan, author of The Labor Wars in Córdoba and Argentina's Missing Bones

"At last! A collection that places cities, with all their contradictions, at the center of the modern history of globalization."--Richard Harris, President of the Urban History Association and author of Building a Market: The Rise of the Home Improvement industry, 1914-1960

“In the Americas, 80% of people now live in cities, and this timely volume takes stock of this epochal process of urbanization, ranging from Montreal to Buenos Aires. Its six perceptive and well-researched case studies explore the multiple meanings of modern urban life from environment and infrastructure to class and politics. Cities, especially big ones, are crucial nodes in global networks of culture and commerce, and this book's insights help us grasp how that came to be and what it means for the twenty-first century.”--J. R. McNeill, coauthor of The Great Acceleration: An Environmental History of the Anthropocene since 1945