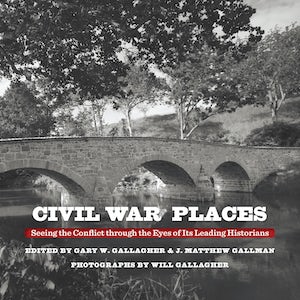 Much has been written about place and Civil War memory, but how do we personally remember and commemorate this part of our collective past? How do battlefields and other historic places help us understand our own history? What kinds of places are worth remembering and why? In this collection of essays, some of the most esteemed historians of the Civil War select a single meaningful place related to the war and narrate its significance. Included here are meditations on a wide assortment of places--Devil's Den at Gettysburg, Hollywood Cemetery in Richmond, the statue of William T. Sherman in New York's Central Park, Burnside Bridge at Antietam, the McLean House in Appomattox, and more. Paired with a contemporary photograph commissioned specifically for this book, each essay offers an unusual and accessible glimpse into how historians think about their subjects.

Gary W. Gallagher is the John L. Nau III Professor of History Emeritus at the University of Virginia.
For more information about Gary W. Gallagher, visit the Author Page.

Will Gallagher is a commercial photographer based in Austin, Texas.
For more information about Will Gallagher, visit the Author Page.

"Talk about finding the Mother Lode! . . . Augmented by evocative black-and-white photographs by Will Gallagher, this collection of deeply moving essays allows the reader to accompany each scholar on a personally guided literary tour probably impossible to replicate in the real world."--America's Civil War

“These are all thought-provoking essays that may well cause many readers to begin (or resume) visiting Civil War sites, as many Americans (such as this reader) did. . . . Civil War Places is heartily recommended to all readers who remain fascinated by that conflict.”--Journal of America’s Military Past

“Makes a significant contribution to the preservation of that sense of awe and wonderment produced by close encounters with our national history. . . . Well-informed, well-crafted, and heartfelt.”--Southwestern Historical Quarterly

"Of the hundreds of Civil War books I have read over the years, this one is now one of my favorites. The authors' personal and often emotional connections to places associated with the war and its memorialization come alive in moving prose and in Will Gallagher's haunting photographs. I have visited most of these places myself, but I came away from reading the essays with a greater understanding and appreciation of their meaning than ever before."--James M. McPherson, author of The War That Forged a Nation: Why the Civil War Still Matters

"Imagine a group called Civil War Supremes and an album of their greatest hits. That's the treat in store for readers of this book. The very best voices, telling their best stories about places that stir them, and us, to reflect on the war and its memory."--Tony Horwitz, author of Confederates in the Attic