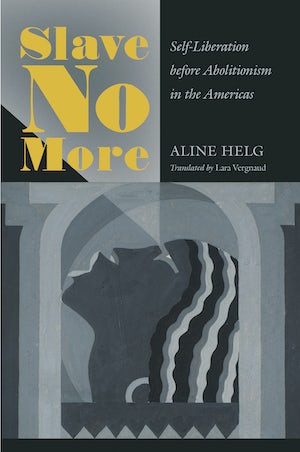 Commanding a vast historiography of slavery and emancipation, Aline Helg reveals as never before how significant numbers of enslaved Africans across the entire Western Hemisphere managed to free themselves hundreds of years before the formation of white-run abolitionist movements. Her sweeping view of resistance and struggle covers more than three centuries, from early colonization to the American and Haitian revolutions, Spanish American independence, and abolition in the British Caribbean. Helg not only underscores the agency of those who managed to become “free people of color” before abolitionism took hold but also assesses in detail the specific strategies they created and utilized.

While recognizing the powerful forces supporting slavery, Helg articulates four primary liberation strategies: flight and marronage; manumission by legal document; military service, for men, in exchange for promised emancipation; and revolt—along with a willingness to exploit any weakness in the domination system. Helg looks at such actions at both individual and community levels and in the context of national and international political movements. Bringing together the broad currents of liberal abolitionism with an original analysis of forms of manumission and marronage, Slave No More deepens our understanding of how enslaved men, women, and even children contributed to the slow demise of slavery.

Aline Helg is professor of history at the University of Geneva and author of Our Rightful Share and Liberty and Equality in Caribbean Colombia, 1770—1835.
For more information about Aline Helg, visit the Author Page.

Lara Vergnaud is a French-English translator based in Washington, D.C.
For more information about Lara Vergnaud, visit the Author Page.

“Delivers a thorough examination of the history of slavery in the Americas. . . . Unravels the evidence to provide new insight into how slaves over those three centuries pursued freedom. . . . A valuable resource.”--Choice Reviews

“ . . . Helg displays an impressive command of the enormous body of secondary literature on Atlantic slavery, and she successfully puts all of that information together to form a compelling picture of slaves’ self-liberation efforts throughout the Americas from the origins of slavery to the abolition of slavery in the British colony of Jamaica in 1838.”--H-Net Reviews

“This comprehensive, geographically expansive study . . . is a trenchant comparative analysis of enslaved people’s self-liberation strategies in the New World. It distills the vast historical interpretation of slavery and freedom across the Americas and makes available to students and scholars alike the continuity and rupture of slave societies as enslaved people expanded their opportunities to pursue freedom.”--Florida Historical Quarterly

“Cromwell dedicates great effort to understanding and diagnosing the society that gave rise to the contraband so characteristic of eighteenth-century colonial Venezuela. He presents a complex picture of a society supported by illegal, corrupt behaviors and a peculiar morality that connected Venezuelans and Europeans in the Caribbean in unsuspected, sustained, and creative ways. . . . Extensive, diverse, and often novel. . . . This is a rich history of contraband in colonial Venezuela.”--Hispanic American Historical Review

“The historical canvas on which Helg works is impressively large and rich. . . . In painstaking detail, and yet with genuine humanity, Helg’s exploration of key elements within the American theater of that long struggle leaves historians of transatlantic slavery and abolition considerably in her debt.”--Journal of Interdisciplinary History

“A well-written and ambitious monograph that compels readers to recognize enslaved people as critical political thinkers and strategists. Readers find a beautifully organized story about slave resistance, and they learn how enslaved people’s strategies largely had little to do with destroying the actual system of slavery. Yet, their collective actions over the course of centuries did exactly that.”--Journal of African American History