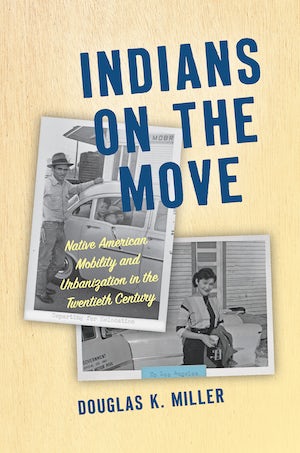 In 1972, the Bureau of Indian Affairs terminated its twenty-year-old Voluntary Relocation Program, which encouraged the mass migration of roughly 100,000 Native American people from rural to urban areas. At the time the program ended, many groups--from government leaders to Red Power activists--had already classified it as a failure, and scholars have subsequently positioned the program as evidence of America’s enduring settler-colonial project. But Douglas K. Miller here argues that a richer story should be told--one that recognizes Indigenous mobility in terms of its benefits and not merely its costs. In their collective refusal to accept marginality and destitution on reservations, Native Americans used the urban relocation program to take greater control of their socioeconomic circumstances. Indigenous migrants also used the financial, educational, and cultural resources they found in cities to feed new expressions of Indigenous sovereignty both off and on the reservation.

The dynamic histories of everyday people at the heart of this book shed new light on the adaptability of mobile Native American communities. In the end, this is a story of shared experience across tribal lines, through which Indigenous people incorporated urban life into their ideas for Indigenous futures.

“By carefully recounting life stories of some of those who migrated, the author suggests that there was another side to the story of American Indian urbanization. . . . Miller’s work is a model study on how to do research and write Native American history and is essential reading on twentieth-century Native America.”--American Indian Quarterly

"This book represents a paradigm shift on how we understand Native mobility and spatiality within the field of American Indian and Indigenous studies."--Daniel M. Cobb, University of North Carolina at Chapel Hill