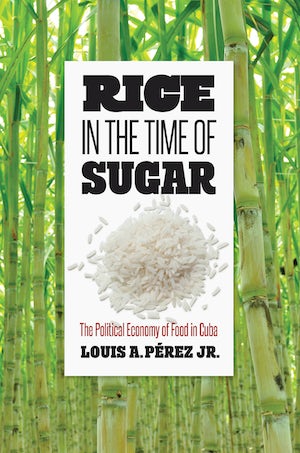 To purchase online via an independent bookstore, visit Bookshop.org
How did Cuba’s long-established sugar trade result in the development of an agriculture that benefited consumers abroad at the dire expense of Cubans at home? In this history of Cuba, Louis A. Pérez proposes a new Cuban counterpoint: rice, a staple central to the island’s cuisine, and sugar, which dominated an export economy 150 years in the making. In the dynamic between the two, dependency on food imports—a signal feature of the Cuban economy—was set in place.

Cuban efforts to diversify the economy through expanded rice production were met with keen resistance by U.S. rice producers, who were as reliant on the Cuban market as sugar growers were on the U.S. market. U.S. growers prepared to retaliate by cutting the sugar quota in a struggle to control Cuban rice markets. Pérez’s chronicle culminates in the 1950s, a period of deepening revolutionary tensions on the island, as U.S. rice producers and their allies in Congress clashed with Cuban producers supported by the government of Fulgencio Batista. U.S. interests prevailed—a success, Pérez argues, that contributed to undermining Batista’s capacity to govern. Cuba’s inability to develop self-sufficiency in rice production persists long after the triumph of the Cuban revolution. Cuba continues to import rice, but, in the face of the U.S. embargo, mainly from Asia. U.S. rice growers wait impatiently to recover the Cuban market.

Louis A. Pérez Jr. is J. Carlyle Sitterson Professor of History at the University of North Carolina at Chapel Hill. A fellow of the American Academy of Arts and Sciences as well as the Academia de la Historia de Cuba, Pérez is author of numerous books on Cuban history and culture, including On Becoming Cuban: Identity, Nationality, and Culture and The Structure of Cuban History: Meanings and Purpose of the Past.
For more information about Louis A. Pérez Jr., visit the Author Page.

“As a much-needed addition to the vast literature on Cuban sugar and tobacco, this book skillfully delineates the devastation export-driven monoculture caused for small producers, domestic markets, sovereignty, and ordinary Cubans' everyday struggles with food scarcity under both capitalism and socialism.”--Choice

“Pérez emphasizes that it is producers of rice, plantains, and vegetables, rather than farmers growing other exports like tobacco, who ought to serve as the melody against which the literature’s overrepresented sugar planters must harmonize.”--Business History Review

“This book connects the scattered dots about land tenure, bilateral trade agreements, international politics, colonialism, and imperialism into a cogent argument. . . . Researchers keen on the theoretical lens of food as cultural and national markers will find this book a tantalizing treat.”--The AAG Review of Books

“Louis A. Pérez, Jr.’s scholarship on Cuban history is prolific and foundational to the field. It is fitting, then, that his latest monograph gives fresh life to older questions of political economy. . . . Rice in the Time of Sugar casts the enduring quandary of Cuban economic dependence into stark relief.”--Bulletin of Latin American Research

“Addressing a new counterpoint in Cuban history, Pérez’s magisterial work focuses on the innovative topic of rice, the main staple food in the Cuban diet, and sugar, the omnipresent cash crop. Pérez connects the economic, political, and cultural implications of both crops, including production, trade, and consumption, to Cuba’s socioeconomic evolution. In light of the long history of relations between the island and the United States, this book challenges the idea that the passage of time has overcome some of the deepest problems in the Cuban economy and politics. But it also may serve as a lesson for a better future shared between the two nations.”—Reinaldo Funes Monzote, professor of history, University of Havana, and Henry Hart Rice Family Foundation Visiting Professor, Yale University

“In this cogent and accessible study of the political economy of food in Cuba, Pérez makes perfectly clear the challenges of a country’s economic dependence on one crop, as well as the larger social, political, and international implications of that dependence.”—Robert Whitney, University of New Brunswick 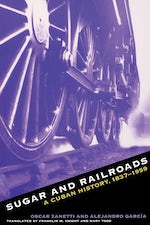