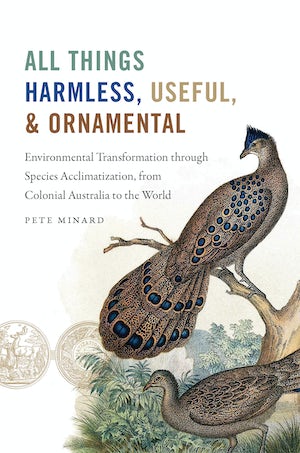 Species acclimatization--the organized introduction of organisms to a new region--is much maligned in the present day. However, colonization depended on moving people, plants, and animals from place to place, and in centuries past, scientists, landowners, and philanthropists formed acclimatization societies to study local species and conditions, form networks of supporters, and exchange supposedly useful local and exotic organisms across the globe.

Pete Minard tells the story of this movement, arguing that the colonies, not the imperial centers, led the movement for species acclimatization. Far from attempting to re-create London or Paris, settlers sought to combine plants and animals to correct earlier environmental damage and to populate forests, farms, and streams to make them healthier and more productive. By focusing particularly on the Australian colony of Victoria, Minard reveals a global network of would-be acclimatizers, from Britain and France to Russia and the United States. Although the movement was short-lived, the long reach of nineteenth-century acclimatization societies continues to be felt today, from choked waterways to the uncontrollable expansion of European pests in former colonies.

Pete Minard is an honorary research fellow at La Trobe University’s Centre for the Study of the Inland.
For more information about Pete Minard, visit the Author Page.

“A nicely balanced account of the efforts of the Colony of Victoria to acclimatise ‘all things harmless, useful, and ornamental’, from the gold rushes of the 1850s until the late nineteenth century. . . . [An] excellent book.”--Historical Records of Australian Science

“Minard applies a whole field of new work in environmental history to questions long considered by the history of science in Australia, producing novel and more complex readings of topics that have occupied historians for decades.”--History Australia

"A good and much-needed study, this book helps us move beyond the general accounts offered by earlier scholars and come to a more nuanced understanding of acclimatization, and the changing, confused aims and ideas behind the movement. The study of acclimatization’s deep roots in the science of the period is useful, and by treating everything from Darwinian theory to the practical points of fish hatcheries, the text shows the varieties of knowledge, from fundamental principles to applied technology, the acclimatizers appealed to."--Thomas R. Dunlap, Texas A&M University