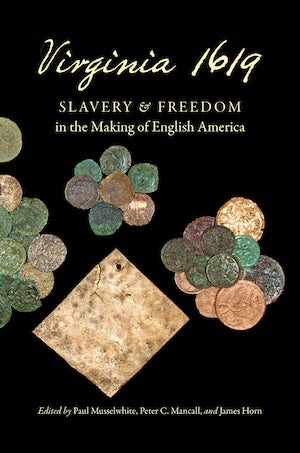 Virginia 1619 provides an opportunity to reflect on the origins of English colonialism around the Chesapeake Bay and the Atlantic world. As the essays here demonstrate, Anglo-Americans have been simultaneously experimenting with representative government and struggling with the corrosive legacy of racial thinking for more than four centuries. Virginia, contrary to popular stereotypes, was not the product of thoughtless, greedy, or impatient English colonists. Instead, the emergence of stable English Atlantic colonies reflected the deliberate efforts of an array of actors to establish new societies based on their ideas about commonwealth, commerce, and colonialism. Looking back from 2019, we can understand that what happened on the shores of the Chesapeake four hundred years ago was no accident. Slavery and freedom were born together as migrants and English officials figured out how to make this colony succeed. They did so in the face of rival ventures and while struggling to survive in a dangerous environment. Three hallmarks of English America--self-government, slavery, and native dispossession--took shape as everyone contested the future of empire along the James River in 1619.

Peter C. Mancall is Andrew W. Mellon Professor of the Humanities and professor of history and anthropology at the University of Southern California.
For more information about Peter C. Mancall, visit the Author Page.

“The contributors to this impressive collection of essays share several common goals: to place the reforms of 1619 within an early modern intellectual context and to define Virginia as a laboratory for the social theories and colonization schemes that arose from such a context.”--Virginia Magazine of History & Biography

“Timely, fresh, and engaging. . . . Each chapter is lucid and compelling, reflecting the careful analysis of diverse and difficult archival materials.”--H-Net Reviews

“The essays in this volume range from very good to excellent…this collection of outstanding essays serves as a reminder that the study of economic and political elites continues to dominate the way we think and write about the past.” – The Journal of Southern History

“A rich collection of essays. . . . This book will attract attention for many reasons, not the least of which because, four centuries later, Americans are as interested as ever in grappling with the shadows cast by the institutions that took root in Jamestown in 1619.” —Early American Literature

"Timely and insightful, Virginia 1619 brings together influential transatlantic scholars to assess debates around race, gender, and political authority from the colonial British Atlantic. Its authors convincingly demonstrate how both deliberate and haphazard decision making in 1619 Virginia ultimately structured a world of inequality with resonance into the present."--Audrey Horning, College of William & Mary and Queen's University Belfast

"In Virginia 1619, an array of renowned and up-and-coming scholars postulates 1619, when African people first appear in Virginia's records, as pivotal in the history of the colony. Any consideration of seventeenth-century English overseas interests and the development of Anglo-America must reckon with the analyses they offer."--L. H. Roper, State University of New York, New Paltz