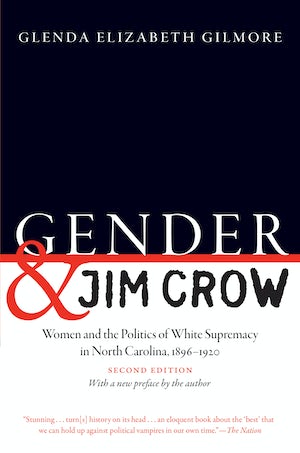 This classic work helps recover the central role of black women in the political history of the Jim Crow era. Glenda Elizabeth Gilmore explores the pivotal and interconnected roles played by gender and race in North Carolina politics from the period immediately preceding the disfranchisement of black men in 1900 to the time black and white women gained the vote in 1920. Gilmore argues that while the ideology of white supremacy reordered Jim Crow society, a generation of educated black women nevertheless crafted an enduring tradition of political activism. In effect, these women served as diplomats to the white community after the disfranchisement of their husbands, brothers, and fathers. Gilmore also reveals how black women's feminism created opportunities to forge political ties with white women, helping to create a foundation for the emergence of southern progressivism. In addition, Gender and Jim Crow illuminates the manipulation of concepts of gender by white supremacists and shows how this rhetoric changed once women, black and white, gained the vote.

"In this stunning reclamation of some largely bypassed aspects of Southern history, Glenda Elizabeth Gilmore casts a vivid light on the nexus of race, gender and power in North Carolina from the late 19th century through the passage of the Nineteenth Amendment (which gave women the vote) in 1920. Gilmore's finely crafted, engrossing book puts women at the center of its inquiry."--Washington Post Book World

"Glenda Elizabeth Gilmore sets out in this book to reinterpret turn-of-the-century southern politics from the perspective of middle-class black women activists. She succeeds brilliantly. The book not only reclaims the long-buried stories of a group of richly compelling characters; it also redefines what should count as 'politics' in southern history and suggests a research agenda that could engage a generation of students."--American Historical Review

"A wonderful analysis of the roles of race, class, and gender in Southern politics prior to the 1900s, but also includes African American disenfranchisement and the woman suffrage movement in the late nineteenth and early twentieth centuries. . . . Gilmore skillfully infuses the important roles both African-American and white women played."--Journal of Women’s History

"Gilmore's book is not only carefully researched and executed but also gracefully written. It should be required reading for anyone interested in southern history, political history, or studies of race and gender."--Journal of Southwest Georgia History

“[Gilmore] uses gender, race, and class to bring to the foreground a variety of dimensions of political participation that are virtually invisible in traditional renderings, and she presents a view of Southern history that is remarkable. . . . [Gender and Jim Crow] brings new meaning and insight to a long-standing account of politics. It sets a different pace from a regional perspective--and, by extension--from a national perspective as well, of who we are now and, indeed, who we were then.”--The Historian