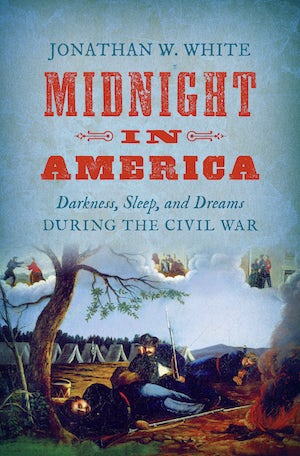 The Civil War brought many forms of upheaval to America, not only in waking hours but also in the dark of night. Sleeplessness plagued the Union and Confederate armies, and dreams of war glided through the minds of Americans in both the North and South. Sometimes their nightly visions brought the horrors of the conflict vividly to life. But for others, nighttime was an escape from the hard realities of life and death in wartime. In this innovative new study, Jonathan W. White explores what dreams meant to Civil War–era Americans and what their dreams reveal about their experiences during the war. He shows how Americans grappled with their fears, desires, and struggles while they slept, and how their dreams helped them make sense of the confusion, despair, and loneliness that engulfed them.

White takes readers into the deepest, darkest, and most intimate places of the Civil War, connecting the emotional experiences of soldiers and civilians to the broader history of the conflict, confirming what poets have known for centuries: there are some truths that are only revealed in the world of darkness.

“A wide-ranging and fascinating study. . . . Reminds us of the haunting effects war can (and does) have on its participants long after the fighting ends.”--Lesley J. Gordon, Civil War Monitor

“White’s prodigious research, conveyed in clear, coherent prose, spotlights an underutilized resource for historians and enthusiasts to use in understanding the personal impact of the war and its effect on postwar lives.”--America’s Civil War

“White offers a detailed tapestry in seven chapters that emphasize soldiers’ sleep deprivation, dream lives that tapped the rank and file’s sexual anxieties and fear of battle, the dreams of home folk and of slaves and former slaves, the abundance of dreams prophesying death, dream images and illustrations in the print world, and the cultural hypertext that arose in the wake of Abraham Lincoln’s presentiments about his own mortality.”--American Historical Review

"Fascinating. . . . Shows that many command decisions historians have viewed as errors were made by men who had not slept in long days."--Times Literary Supplement