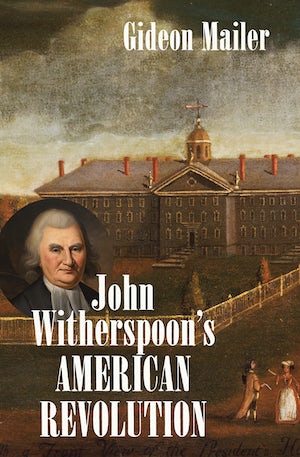 In 1768, John Witherspoon, Presbyterian leader of the evangelical Popular party faction in the Scottish Kirk, became the College of New Jersey's sixth president. At Princeton, he mentored constitutional architect James Madison; as a New Jersey delegate to the Continental Congress, he was the only clergyman to sign the Declaration of Independence. Although Witherspoon is often thought to be the chief conduit of moral sense philosophy in America, Mailer's comprehensive analysis of this founding father's writings demonstrates the resilience of his evangelical beliefs. Witherspoon's Presbyterian evangelicalism competed with, combined with, and even superseded the civic influence of Scottish Enlightenment thought in the British Atlantic world.

John Witherspoon's American Revolution examines the connection between patriot discourse and long-standing debates--already central to the 1707 Act of Union--about the relationship among piety, moral philosophy, and political unionism. In Witherspoon's mind, Americans became different from other British subjects because more of them had been awakened to the sin they shared with all people. Paradoxically, acute consciousness of their moral depravity legitimized their move to independence by making it a concerted moral action urged by the Holy Spirit. Mailer's exploration of Witherspoon's thought and influence suggests that, for the founders in his circle, civic virtue rested on personal religious awakening.

Gideon Mailer is associate professor of history at the University of Minnesota, Duluth.
For more information about Gideon Mailer, visit the Author Page.

“Readers interested in placing one of the Garden State's favorite sons in a transatlantic world of ideas will not find a better book about the only minister to sigh the Declaration of Independence.”--New Jersey Studies

“A landmark in Scottish-American historiography.”--Eighteenth-Century Scotland

“This thoroughly researched work is best suited for scholars of Enlightenment history and the American Revolution.”--Library Journal

"Mailer does more than urge scholars to look at Witherspoon anew; he makes a compelling case for them to use Witherspoon’s experience as a lens through which to more accurately gauge the interplay of religious conflict and Enlightenment philosophy in the founding of the United States."--American Historical Review

“Mailer’s tour de force of research has produced a cornucopia of insights into a key but underappreciated leader of the eighteenth-century Atlantic world. With careful probing of Witherspoon’s Scottish career and painstaking examination of his central role in the colonial break from Britain, Mailer corrects what other historians, including myself, have written about this influential minister, educator, and public servant. A special contribution is Mailer’s demonstration that Witherspoon, although with some ambiguity, sustained foundational evangelical convictions in his career on both sides of the Atlantic.”—Mark A. Noll, University of Notre Dame