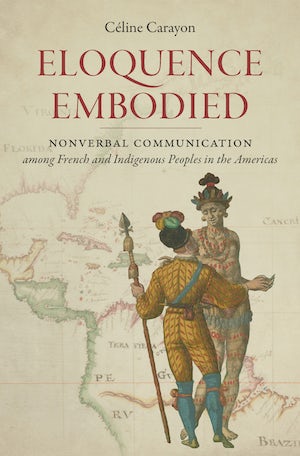 Taking a fresh look at the first two centuries of French colonialism in the Americas, this book answers the long-standing question of how and how well Indigenous Americans and the Europeans who arrived on their shores communicated with each other. French explorers and colonists in the sixteenth century noticed that Indigenous peoples from Brazil to Canada used signs to communicate. The French, in response, quickly embraced the nonverbal as a means to overcome cultural and language barriers. Céline Carayon's close examination of their accounts enables her to recover these sophisticated Native practices of embodied expressions.

In a colonial world where communication and trust were essential but complicated by a multitude of languages, intimate and sensory expressions ensured that French colonists and Indigenous peoples understood each other well. Understanding, in turn, bred both genuine personal bonds and violent antagonisms. As Carayon demonstrates, nonverbal communication shaped Indigenous responses and resistance to colonial pressures across the Americas just as it fueled the imperial French imagination. Challenging the notion of colonial America as a site of misunderstandings and insurmountable cultural clashes, Carayon shows that Natives and newcomers used nonverbal means to build relationships before the rise of linguistic fluency--and, crucially, well afterward.

Céline Carayon is associate professor of history at Salisbury University.
For more information about Céline Carayon, visit the Author Page.

“A sophisticated study, which is superbly grounded in the secondary literature. . . . [Carayon] extends to the gestural the attention that specialists of colonial and precolonial settings have lavished for some time now on the graphic and the oral. Eloquence Embodied enlarges the realm of the intelligible—for the participants, back then, and now for us.”—Early American Literature

"Eloquence Embodied is an impressive and ambitious piece of scholarship. Céline Carayon has written a sweeping and deeply researched book on nonverbal communication across the early colonial French world. Exploring a wide variety of Indigenous and French practices, beliefs, and ideas, she reframes our understanding of the core communication processes that underlay even the most basic colonial interactions."--Alejandra Dubcovsky, University of California, Riverside

“Céline Carayon sheds valuable new light on an old subject: cultural exchange between Amerindians and Europeans in the age of early modern empire. Drawing from a rich array of sources, she uncovers heretofore unexplored forms of nonverbal communication and shows how decisively Indigenous peoples shaped these interactions. Powerfully argued, Eloquence Embodied calls on us to rethink the history of language in colonial contexts.”--Paul Cohen, University of Toronto

"Eloquence Embodied offers fascinating insights into relationships built on nonverbal communication. Céline Carayon argues that French venturers and the Americans they encountered both came from rich traditions of communication that emphasized gesture as well as words. Employing these familiar forms in the absence of shared language, each side read the other's meanings, and intentions, with surprising accuracy."--Karen Ordahl Kupperman, Emerita, New York University