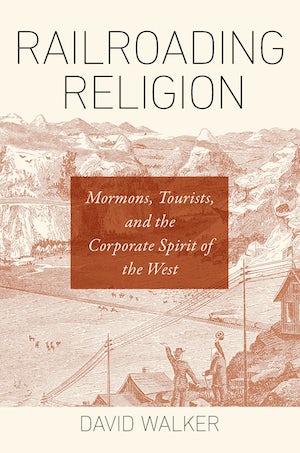 Railroads, tourism, and government bureaucracy combined to create modern religion in the American West, argues David Walker in this innovative study of Mormonism’s ascendency in the railroad era. The center of his story is Corinne, Utah—an end-of-the-track, hell-on-wheels railroad town founded by anti-Mormon businessmen. In the disputes over this town’s frontier survival, Walker discovers intense efforts by a variety of theological, political, and economic interest groups to challenge or secure Mormonism’s standing in the West. Though Corinne’s founders hoped to leverage industrial capital to overthrow Mormon theocracy, the town became the site of a very different dream.

Economic and political victory in the West required the production of knowledge about different religious groups settling in its lands. As ordinary Americans advanced their own theories about Mormondom, they contributed to the rise of religion itself as a category of popular and scholarly imagination. At the same time, new and advantageous railroad-related alliances catalyzed LDS Church officials to build increasingly dynamic religious institutions. Through scrupulous research and wide-ranging theoretical engagement, Walker shows that western railroads did not eradicate or diminish Mormon power. To the contrary, railroad promoters helped establish Mormonism as a normative American religion.

David Walker is assistant professor of religious studies at the University of California, Santa Barbara.


For more information about David Walker, visit the Author Page.

“Embracing the material turn in religious studies, Walker writes about tourist sites, trains, and beaches, among other things, as major parts of nineteenth-century religion that illustrate the complexity of the boundaries of religion as a category. Importantly, the book contributes to an understudied period of Mormonism’s American history (1860s-1890s) and brings an exciting analysis to its subject matter.”--Journal of the American Academy of Religion

“Railroading Religion is one of the most theoretically rich and provocatively argued books written on Mormon studies in quite some time. While the benefits for those who work on Mormonism are clear, scholars of religion will also be forced to consider dominant ideas concerning secularism and religion, not to mention modernity.”--Church History and Religious Culture

"A fascinating book ... historically rich and theoretically provocative ... a wonderfully concrete and well-documented example of the social construction of sacred space."--Religion

“Walker tells the story of Mormonism’s evolution during the Utah period in a new way. His approach asks scholars to reconsider long-held beliefs and theories about religion. Through compelling arguments, historical insight, and innovative storytelling, Railroading Religion is valuable for anyone interested in the history of the American West and nineteenth-century secularism.”--Nova Religio

“Walker’s book provides a shining example of how to practice a historiography of religions that incorporates, and builds upon, secularity theory’s best insights.” – Mormon Studies Review