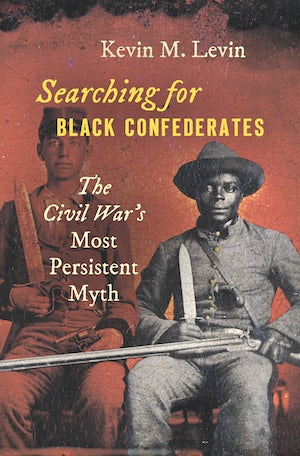 More than 150 years after the end of the Civil War, scores of websites, articles, and organizations repeat claims that anywhere between 500 and 100,000 free and enslaved African Americans fought willingly as soldiers in the Confederate army. But as Kevin M. Levin argues in this carefully researched book, such claims would have shocked anyone who served in the army during the war itself. Levin explains that imprecise contemporary accounts, poorly understood primary-source material, and other misrepresentations helped fuel the rise of the black Confederate myth. Moreover, Levin shows that belief in the existence of black Confederate soldiers largely originated in the 1970s, a period that witnessed both a significant shift in how Americans remembered the Civil War and a rising backlash against African Americans’ gains in civil rights and other realms.

Levin also investigates the roles that African Americans actually performed in the Confederate army, including personal body servants and forced laborers. He demonstrates that regardless of the dangers these men faced in camp, on the march, and on the battlefield, their legal status remained unchanged. Even long after the guns fell silent, Confederate veterans and other writers remembered these men as former slaves and not as soldiers, an important reminder that how the war is remembered often runs counter to history.

Kevin M. Levin is a historian and educator based in Boston. He is author of Remembering the Battle of the Crater: War as Murder and the award-winning blog Civil War Memory (cwmemory.com).
For more information about Kevin M. Levin, visit the Author Page.

"Excellent. . . . a bracing corrective, a slender yet vital volume in the growing library of texts dedicated to dispelling white supremacist talking points."--New Republic

“Levin’s timely and telling account should be required reading for anyone who wants to understand the uses and abuses of history and the power and dangers of mythmaking.”--Library Journal, starred review

“Provides an important corrective to a thriving, albeit bogus, subtopic of Civil War history, which claims that some African Americans willingly fought for the Confederacy. . . . [and] comprehensively dismantles the associated “Lost Cause” narrative.”--Choice

“Levin’s study is the first of its kind to blueprint and then debunk the mythology of enslaved African Americans who allegedly served voluntarily in behalf of the Confederacy. . . . Searching for Black Confederates is highly recommended for historians, students, and enthusiasts of the Civil War and Civil War memory.”--Journal of Southern History

“Levin has made a significant contribution to the scholarship on the American Civil War and with this volume secures his place as one our most important memory scholars. His methodical evaluation of memory and the black Confederate myth demonstrates ways we can and should explain how and why fabricated historical narratives emerge and are maintained.”--H-Net Reviews

“This book is a major contribution to any Civil War bookshelf. . . . [Levin] reveals how [the] story of black Confederates bolstered romantic views of the loyal, happy slaves (slavery wasn’t so bad after all) and countered the “slavery caused the war” narrative in so doing. . . . Levin’s authoritative voice will serve to counter such noxious fake history for years to come.”--Journal of African American History