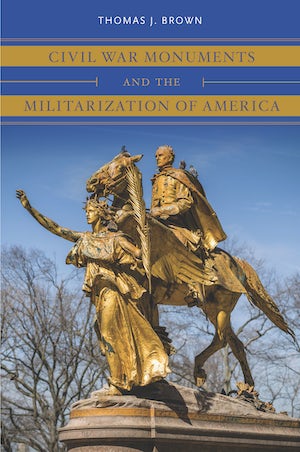 This sweeping new assessment of Civil War monuments unveiled in the United States between the 1860s and 1930s argues that they were pivotal to a national embrace of military values. Americans' wariness of standing armies limited construction of war memorials in the early republic, Thomas J. Brown explains, and continued to influence commemoration after the Civil War. As large cities and small towns across the North and South installed an astonishing range of statues, memorial halls, and other sculptural and architectural tributes to Civil War heroes, communities debated the relationship of military service to civilian life through fund-raising campaigns, artistic designs, oratory, and ceremonial practices. Brown shows that distrust of standing armies gave way to broader enthusiasm for soldiers in the Gilded Age. Some important projects challenged the trend, but many Civil War monuments proposed new norms of discipline and vigor that lifted veterans to a favored political status and modeled racial and class hierarchies. A half century of Civil War commemoration reshaped remembrance of the American Revolution and guided American responses to World War I.

Brown provides the most comprehensive overview of the American war memorial as a cultural form and reframes the national debate over Civil War monuments that remain potent presences on the civic landscape.

“In this insightful and deeply researched study of Civil War monuments, Thomas Brown argues persuasively that over time, monument builders in both the North and the South used an imaginative trove of aesthetics to efface battlefield horrors and rework tragedy into noble deeds and glorious causes.”--North Carolina Historical Review

“Civil War Monuments and the Militarization of America is a remarkable contribution to the scholarship on Civil War memory. [Brown’s] unique perspective and attention to detail speaks to the profound influence of Civil War monuments on American life well into the late twentieth century.”--Missouri Historical Review

“Brown brings overdue and timely research on Civil War monuments in both the North and the South. . . . Reading Brown’s work will give a deeper appreciation for these tangible reminders of . . . the American Civil War.”--The Annals of Iowa

“A well-illustrated, interesting, and deeply researched study that. . . . Will remain a standard work on American Civil War monuments for some time.”--H-Net Reviews

“[This] fascinating new book. . . . Rests on exhaustive research and displays an intimidating erudition. . . . Brown has written an impressive, important book that everyone interested in the Civil War’s impact, Civil War memory, or the current debate over Confederate statues should read and ponder.”--Civil War Book Review

“This brilliant study of Civil War monuments in the American psyche and landscape since the end of that conflict presents commemoration as a crucible of meaning-making that cannot be confined to the forms and materials of the monuments themselves and even less to the events and contexts surrounding their creation. . . . Exhaustively researched and meticulously documented, this book ultimately achieves a remarkable synthesis.”--CHOICE