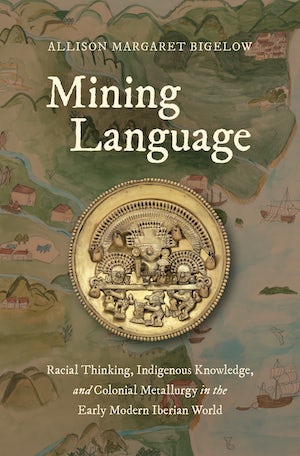 Mineral wealth from the Americas underwrote and undergirded European colonization of the New World; American gold and silver enriched Spain, funded the slave trade, and spurred Spain's northern European competitors to become Atlantic powers. Building upon works that have narrated this global history of American mining in economic and labor terms, Mining Language is the first book-length study of the technical and scientific vocabularies that miners developed in the sixteenth and seventeenth centuries as they engaged with metallic materials. This language-centric focus enables Allison Bigelow to document the crucial intellectual contributions Indigenous and African miners made to the very engine of European colonialism.

By carefully parsing the writings of well-known figures such as Cristóbal Colón and Gonzalo Fernández de Oviedo y Valdés and lesser-known writers such Álvaro Alonso Barba, a Spanish priest who spent most of his life in the Andes, Bigelow uncovers the ways in which Indigenous and African metallurgists aided or resisted imperial mining endeavors, shaped critical scientific practices, and offered imaginative visions of metalwork. Her creative linguistic and visual analyses of archival fragments, images, and texts in languages as diverse as Spanish and Quechua also allow her to reconstruct the processes that led to the silencing of these voices in European print culture.

"Allison Bigelow approaches mining as a vernacular science, and, in doing so, she has written an innovative, original history of the Atlantic world that centers Native America and the African diaspora. This important book, as erudite as it is methodologically creative, forces us to think in new ways about the relationship between colonialism, epistemology, and race."--Marcy Norton, University of Pennsylvania

"Allison Bigelow has mined a dizzying array of early modern Iberian manuscripts and printed texts to form a lexicon centered on four ancient Western obsessions: gold, silver, iron, and copper. She demonstrates how a seemingly esoteric language of metallurgy and mining not only hides the ugly innards of empire but also contains the keys to hidden knowledge systems. In Mining Language, the hills are alive and the rocks all but squirm and copulate, anxious to reveal their colors, tastes, and smells. You will never think of these familiar substances in the same way."--Kris Lane, Tulane University

"Mining Language is exemplary global scholarship, tying together disparate geographies through the practice and parlance of metallurgy and extraction. Akin to an early modern alchemical experiment--refined yet highly combustible--Bigelow’s prose gleams with the languages of chroniclers, caciques, and cimarrones alike, whose amalgamated discourse described and defined a new material age."--Neil Safier, The John Carter Brown Library