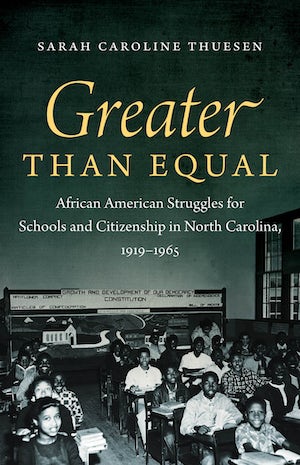 During the half century preceding widespread school integration, black North Carolinians engaged in a dramatic struggle for equal educational opportunity as segregated schooling flourished. Drawing on archival records and oral histories, Sarah Thuesen gives voice to students, parents, teachers, school officials, and civic leaders to reconstruct this high-stakes drama. She explores how African Americans pressed for equality in curricula, higher education, teacher salaries, and school facilities; how white officials co-opted equalization as a means of forestalling integration; and, finally, how black activism for equality evolved into a fight for something "greater than equal"--integrated schools that served as models of civic inclusion.

These battles persisted into the Brown era, mobilized black communities, narrowed material disparities, fostered black school pride, and profoundly shaped the eventual movement for desegregation. Thuesen emphasizes that the remarkable achievements of this activism should not obscure the inherent limitations of a fight for equality in a segregated society. In fact, these unresolved struggles are emblematic of fault lines that developed across the South, and serve as an urgent reminder of the inextricable connections between educational equality, racial diversity, and the achievement of first-class citizenship.

“Thuesen joins a rich and growing literature that embraces the idea of a ‘Long Civil Rights Movement.’”--Journal of Interdisciplinary History

“An outstanding work of scholarship that substantially increases our understanding of the history of education and the long black freedom struggle.”--The North Carolina Historical Review

“Thuesen’s nuanced analysis deepens our understanding of the history of education in North Carolina.”--Journal of American History

“This study of the African American struggle for educational equality is crucial reading for anyone interested in the long civil rights movement, educational reform, or the relationship between school and citizenship. Thuesen’s research is impeccable; her writing is clear; and her arguments are well-grounded in the facts.”--American Historical Review

“A precise and reasoned exploration of this rich and complex history, particularly attentive to a range of black efforts and opinions.”--Journal of Southern History