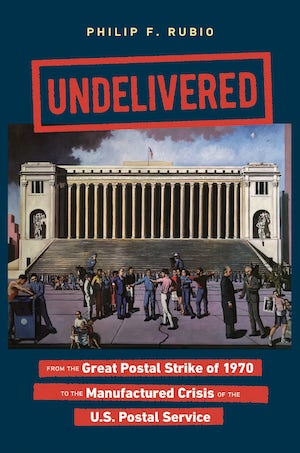 Excerpt from The Postal Record

Author Op-Ed In The Atlantic

Article in Perspectives on History

For eight days in March 1970, over 200,000 postal workers staged an illegal "wildcat" strike--the largest in United States history--for better wages and working conditions. Picket lines started in New York and spread across the country like wildfire. Strikers defied court injunctions, threats of termination, and their own union leaders. In the negotiated aftermath, the U.S. Post Office became the U.S. Postal Service, and postal workers received full collective bargaining rights and wage increases, all the while continuing to fight for greater democracy within their unions.

Using archives, periodicals, and oral histories, Philip Rubio shows how this strike, born of frustration and rising expectations and emerging as part of a larger 1960s-1970s global rank-and-file labor upsurge, transformed the post office and postal unions. It also led to fifty years of clashes between postal unions and management over wages, speedup, privatization, automation, and service. Rubio revives the 1970 strike story and connects it to today's postal financial crisis that threatens the future of a vital 245-year-old public communications institution and its labor unions.

Philip F. Rubio is professor of history at North Carolina A&T State University and the author of There’s Always Work at the Post Office: African American Postal Workers and the Fight for Jobs, Justice, and Equality.
For more information about Philip F. Rubio, visit the Author Page.

“This book chronicles the roots, conduct, and legacy of the 1970 strike by more than 200,000 postal workers from 671 offices ranging from Albany and Akron to St. Paul and San Francisco. . . . Rubio, a former postal clerk and letter carrier, closes this timely, compelling account with an extended reflection on the costs of the politically manufactured financial crisis, the postal service’s increasingly diverse workforce, and the country at large.” --CHOICE

"Undelivered contributes to our understanding of public-sector workers and their unions, a largely underdeveloped aspect of labor history, and it challenges the notion of a decline in activism beginning in the 1970s, a view rooted in the fates of industrial unions...Rubio has produced an account that is national in scope, even if tilted toward New York." --The North Carolina Historical Review

"Finally, a comprehensive history of the 1970 postal strike: Philip F. Rubio's examination of this understudied strike is a valuable addition to the field of labor history. By framing this action as a centerpiece of the democratic unionist revival of the 1970s, he reminds us that probably no workers had more success in transforming their union culture than postal workers." --Journal of Southern History

"A delight from start to finish and a vindication of the ability of old-style labor history--starting from workplaces, workers, and a strike--to address profoundly the histories of race, class, technology, and the state. Marking the jubilee of the successful, illegal strike of postal workers in 1970, the book offers a stirring account of that historic but little-recalled conflict. It is equally acute on the ways in which the workers’ power that the strike exemplified and expanded has struggled since to address a changed political economy of delivering letters and goods, attacks from the state, contrived crises, the decline of organized labor, and difficulties in sustaining rank-and-file boldness amid challenges that make it more necessary than ever."--David Roediger, author of How Race Survived U.S. History: From Settlement and Slavery to the Obama Phenomenon

"Philip Rubio tells the postal workers' story from their dramatic national strike of 1970 to their recent fight against privatization with passion. It's a narrative that no one interested in the recent history of U.S. workers and the labor movement can afford to neglect."--Joseph A. McCartin, author of Collision Course: Ronald Reagan, the Air Traffic Controllers, and the Strike that Changed America

"The 1970 postal strike is a landmark episode in U.S. labor history, and Rubio has written a thorough and fresh account of this overlooked dispute."--Timothy Minchin, author of Labor Under Fire: A History of the AFL-CIO Since 1979