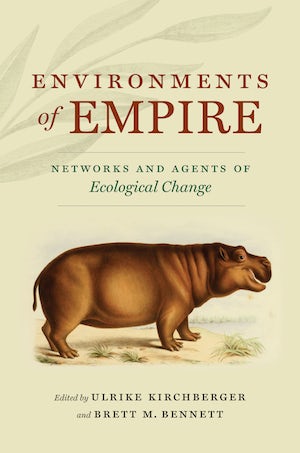 The age of European high imperialism was characterized by the movement of plants and animals on a historically unprecedented scale. The human migrants who colonized territories around the world brought a variety of other species with them, from the crops and livestock they hoped to propagate, to the parasites, invasive plants, and pests they carried unawares, producing a host of unintended consequences that reshaped landscapes around the world. While the majority of histories about the dynamics of these transfers have concentrated on the British Empire, these nine case studies--focused on the Ottoman, French, Dutch, German, and British empires--seek to advance a historical analysis that is comparative, transnational, and interdisciplinary to understand the causes, consequences, and networks of biological exchange and ecological change resulting from imperialism.

Brett Bennett is associate professor of history at the University of Johannesburg and Western Sydney University.
For more information about Brett M. Bennett, visit the Author Page.

“Readers are left with a range of new perspectives and methodologies that examine the varied aspects of ecological imperialism. Agricultural historians will find the collection especially helpful given that many of the essays focus on the development of colonial and modern agricultural practices.”--Agricultural History

“This work broadens the focus to include a more diverse set of case studies drawn from the Ottoman, French, British, Dutch, and German Empires, thereby allowing a wider scope of comparative and transnational analyses. . . . The various contributing authors present detailed, expansive histories drawing on a range of theoretical approaches. . . . [to] bring the importance of ecological factors for the study of empires further to the center of attention.”--CHOICE

“…Environments of Empire is a particularly welcome addition to the flourishing area of environmental studies.” – Isis

"This collection provides tantalizing insights into all manner of imperial, trans-imperial, and transnational exchanges, and turns our attentions to the enormous riches of non-English language sources and scholarship."--Ruth Morgan, Monash University