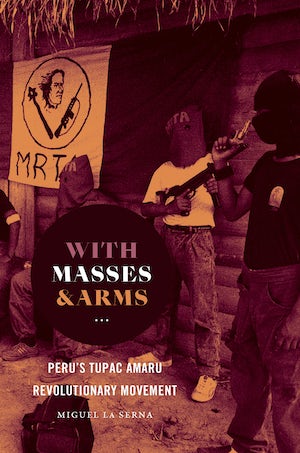 Miguel La Serna’s gripping history of the Tupac Amaru Revolutionary Movement (MRTA) provides vital insight into both the history of modern Peru and the link between political violence and the culture of communications in Latin America. Smaller than the well-known Shining Path but just as remarkable, the MRTA emerged in the early 1980s at the beginning of a long and bloody civil war. Taking a close look at the daily experiences of women and men who fought on both sides of the conflict, this fast-paced narrative explores the intricacies of armed action from the ground up.

While carrying out a campaign of urban guerrilla warfare ranging from vandalism to kidnapping and assassinations, the MRTA vied with state forces as both tried to present themselves as most authentically Peruvian. Appropriating colors, banners, names, images, and even historical memories, hand-in-hand with armed combat, the Tupac Amaristas aimed to control public relations because they insightfully believed that success hinged on their ability to control the media narrative. Ultimately, however, the movement lost sight of its original aims, becoming more authoritarian as the war waged on. In this sense, the history of the MRTA is the story of the euphoric draw of armed action and the devastating consequences that result when a political movement succumbs to the whims of its most militant followers.

Miguel La Serna, associate professor of history at the University of North Carolina at Chapel Hill, is the author of The Corner of the Living: Ayacucho on the Eve of the Shining Path Insurgency and the coauthor, with Orin Starn, of The Shining Path: Love, Madness, and Revolution in the Andes
For more information about Miguel La Serna, visit the Author Page.

“A triumph—easily the most compelling history I’ve read in years. Drawing on an astonishing array of interviews with key figures who were part of the MRTA’s history, along with fine archival research, this extraordinary book reads as easily as a fiction thriller while offering a clear understanding of the MRTA and what it did and did not accomplish. Essential, gripping reading.”—Jaymie Patricia Heilman, author of Before the Shining Path: Politics in Rural Ayachucho

“Analyses of Peru’s internal armed conflict have tended to neglect the role of the MRTA. This engaging book draws on the life histories and experiences of several militants to shed light on why men and women supported and joined, but also left, the MRTA. In so doing, it humanizes Peru’s descent into violence, while avoiding romanticizing the MRTA or its members--and helps us to understand it.”—Paulo Drinot, author of The Allure of Labor: Workers, Race, and the Making of the Peruvian State