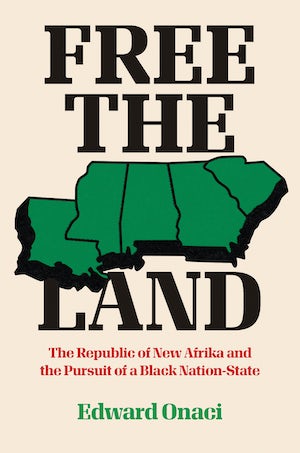 On March 31, 1968, over 500 Black nationalists convened in Detroit to begin the process of securing independence from the United States. Many concluded that Black Americans' best remaining hope for liberation was the creation of a sovereign nation-state, the Republic of New Afrika (RNA). New Afrikan citizens traced boundaries that encompassed a large portion of the South--including South Carolina, Georgia, Alabama, Mississippi, and Louisiana--as part of their demand for reparation. As champions of these goals, they framed their struggle as one that would allow the descendants of enslaved people to choose freely whether they should be citizens of the United States. New Afrikans also argued for financial restitution for the enslavement and subsequent inhumane treatment of Black Americans. The struggle to "Free the Land" remains active to this day.

This book is the first to tell the full history of the RNA and the New Afrikan Independence Movement. Edward Onaci shows how New Afrikans remade their lifestyles and daily activities to create a self-consciously revolutionary culture, and argues that the RNA's tactics and ideology were essential to the evolution of Black political struggles. Onaci expands the story of Black Power politics, shedding new light on the long-term legacies of mid-century Black Nationalism.

Edward Onaci is associate professor of history at Ursinus College.
For more information about Edward Onaci, visit the Author Page.

“In Free the Land, Onaci reorients histories of African American territorial nationalism. . . . By focusing on the changes in New Afrikan lives, Onaci foregoes the well-laid path of histories of the Black Power movement. . . . Free the Land, ultimately, demonstrates that even when politics seems to be about something as traditional as acquiring land, it is also about the unseen labor of building a movement and about the transformation of the lives of its constituents.”--The Baffler

“The quest for land and justice by the members of the Republic of New Afrika (RNA) organization forms the heart of Edward Onaci’s monograph. Their journey intersects with elements of the Civil Rights, Black Power, and Black Lives Matter movements in ways that should make us think deeper about the intellectual, cultural, and social contours of the longer Black Freedom movement.”--Society for U.S. Intellectual History

“Onaci’s work eloquently reveals the foundation undergirding contemporary intellectual and social movements such as the rise of Black cultural nationalism, the advent of Afrocentric scholarship, the construction of Afrofuturism…and the philosophical geneses of the Black Lives Matter movement.” – The Journal of Southern History

“Onaci’s compelling account of late-twentieth-century efforts to form an independent Black nation-state in the United States, reveals extraordinary worlds and political horizons that are too often occluded by the methodological nationalism common in the discipline of history.” – Reviews in American History

"Professor Onaci has written a comprehensive history of the New Afrikan Independence Movement that establishes its significance to the Provisional Government of the Republic of New Afrika and other New Afrikan formations in the Black Power movement and demonstrates their connection to contemporary political activism and the debates around reparations for descendants of enslaved Africans."--Akinyele Umoja, Georgia State University

"In this engaging and meticulously researched book, Edward Onaci tells the story of how the New Afrikan Independence Movement captured the imagination of thousands of Black Americans during the twentieth century. With incisive analysis and vivid examples, Onaci reveals how the movement laid the intellectual groundwork for contemporary movements for Black liberation and reparations for the injustices of slavery and segregation. By centering the lives and ideas of those who led and supported the movement, Onaci’s book provides a lens to better understand the complex and multilayered meanings of citizenship and belonging in the United States."--Keisha N. Blain, author of Set the World on Fire: Black Nationalist Women and the Global Struggle for Freedom