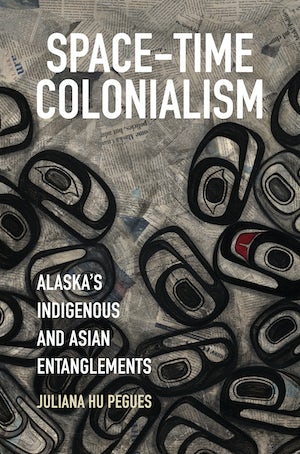 As the enduring "last frontier," Alaska proves an indispensable context for examining the form and function of American colonialism, particularly in the shift from western continental expansion to global empire. In this richly theorized work, Juliana Hu Pegues evaluates four key historical periods in U.S.-Alaskan history: the Alaskan purchase, the Gold Rush, the emergence of salmon canneries, and the World War II era. In each, Hu Pegues recognizes colonial and racial entanglements between Alaska Native peoples and Asian immigrants. In the midst of this complex interplay, the American colonial project advanced by differentially racializing and gendering Indigenous and Asian peoples, constructing Asian immigrants as "out of place" and Alaska Natives as "out of time." Counter to this space-time colonialism, Native and Asian peoples created alternate modes of meaning and belonging through their literature, photography, political organizing, and sociality.

Offering an intersectional approach to U.S. empire, Indigenous dispossession, and labor exploitation, Space-Time Colonialism makes clear that Alaska is essential to understanding both U.S. imperial expansion and the machinations of settler colonialism.

Juliana Hu Pegues is associate professor in the Department of Literatures in English at Cornell University.
For more information about Juliana Hu Pegues, visit the Author Page.

"An outstanding interdisciplinary integration of Indigenous, Asian American, and settler-colonial studies, with a compelling argument for why these fields can--and indeed must--be brought into conversation with each other. Hu Pegues offers an exemplar of archivally grounded and theoretically informed scholarship that will no doubt make a real splash."--Coll Thrush, author of Indigenous London: Native Travelers at the Heart of Empire

"Space-Time Colonialism is beautifully written and impeccably researched. By focusing on Alaska, this book is indispensable for filling a critical void in settler-colonial studies. Hu Pegues delivers a brilliant and uncompromising critical engagement with the racial and Indigenous occlusions, obfuscations, and erasures that permeate the historiography of Alaska."--Iyko Day, author of Alien Capital: Asian Racialization and the Logic of Settler Colonial Capitalism