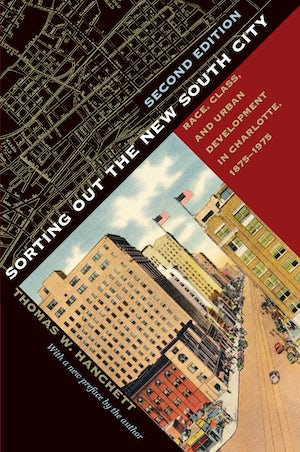 One of the largest and fastest-growing cities in the South, Charlotte, North Carolina, came of age in the New South decades of the late nineteenth and early twentieth centuries, transforming itself from a rural courthouse village to the trading and financial hub of America's premier textile manufacturing region. In this book, Thomas W. Hanchett traces the city's spatial evolution over the course of a century, exploring the interplay of national trends and local forces that shaped Charlotte and, by extension, other New South urban centers.

Hanchett argues that racial and economic segregation are not age-old givens but products of a decades-long process. Well after the Civil War, Charlotte's whites and blacks, workers and business owners, lived in intermingled neighborhoods. The rise of large manufacturing enterprises in the 1880s and 1890s brought social and political upheaval, however, and the city began to sort out into a "checkerboard" of distinct neighborhoods segregated by both race and class. When urban renewal and other federal funds became available in the mid-twentieth century, local leaders used the money to complete the sorting-out process, creating a "sector" pattern in which wealthy whites increasingly lived on one side of town and blacks on the other. A new preface by the author confronts the contemporary implications of Charlotte’s resegregation and prospects for its reversal.

Thomas W. Hanchett taught urban history and history preservation at Youngstown State University and Cornell University before becoming the staff historian at the Levine Museum of the New South in Charlotte.
For more information about Thomas W. Hanchett, visit the Author Page.

Praise for the previous edition:

"Tom Hanchett's account suggests some surprising things about the development of Southern cities. The segregated Southern city of the mid-20th century, he argues, originated not in the Old South or the early decades of the New; during those periods, he points out, the distribution of the races throughout [Charlotte] was in a 'salt and pepper' pattern. Urban segregation, Hanchett suggests, was a later creation...it was literally reactionary, a 20th-century reversal."--New York Times

"This is a southern story of the emergence of mercantile, industrial, banking, and real estate entrepreneurs and how they shaped a city in an era of black disenfranchisement, Jim Crow, and the waning political power of white workers. . . . [Hanchett] provides a broad context for understanding that the shape of our cities is far from happenstance."--Southern Cultures

"Engaging wider narratives and historiographical debates, meticulously mapping local particularities, and building upon years of experience in the city’s historic preservation effort, Hanchett not only illuminates Charlotte's contested past but also makes a significant contribution to American urban history."--Journal of American History

"This excellent study gives the city the attention it deserves, especially now that it has emerged as a major international financial center. . . . {It] chronicles Charlotte’s history through the lens of its landscape and spatial profile: the shape and character of its neighborhoods, land uses, street patterns, and populations. . . . Hanchett's judgments are thoughtful and well-supported, and the result is a most worthwhile addition to the literature on the urban South."--American Historical Review

"This well-crafted and extremely readable study of a small city and its development should be a touchstone for comparative analysis in both southern and urban history."--Choice