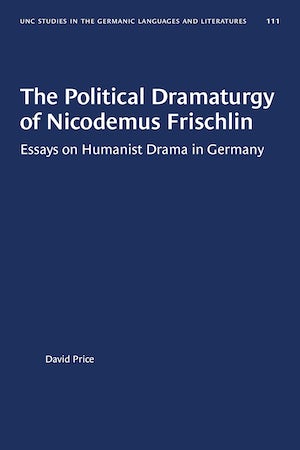 This is the first comprehensive study of the dramas of Nicodemus Frischlin (1547–1590), one of the most versatile and complex playwrights of early modern Germany. Frischlin’s broad range encompassed biblical, confessional, and historical drama, all of which expressed bold social and political criticism. His plays were influential, frequently printed and translated, and often controversial. He ended his short life trying to escape prison, where he was being held for threatening further political publications.

Price analyzes Frischlin’s dramatic output, as well as humanist literary theory, in particular Renaissance approaches to rhetoric and imitation, to explain how humanists modified or even subverted classical forms to accommodate political and theological activism.

"Using Frischlin's many plays and tracts as a starting point, the author comes to astute conclusions as to the important underlying connections between art and life as perceived by the German Humanists. . . . Rarely does one encounter such a lively presentation of early modern material."--Sixteenth Century Journal