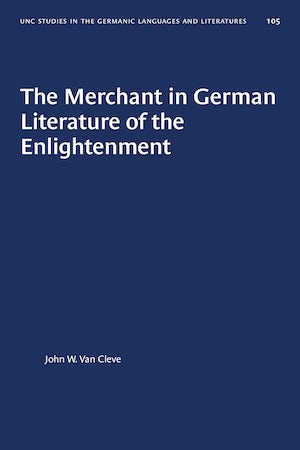 John Van Cleve analyzes the influence of the merchant class on what Leo Balet termed the Verburgerlichung (the 'becoming middle-class') of German literature during the eighteenth century. He describes the origins and development of the class and examines its successive images in works by Haller, Schnabel, Borkenstein, Luise Gottsched, J. E. Schlegel, Gellert, and Lessing.

Between the years 1729 and 1750, merchants were better able to lend financial support to the literary world than were civil servants and professionals. Although merchants were central in the cultural life of the German states, they were usually less educated than other members of their social stratum and therefore less disposed to literature. Tradition has cast the merchant class in a highly unflattering light as ethically indefensible. Van Cleve's in-depth analysis traces the evolution of attitudes toward merchants from negative, underdeveloped images to positive, heroic portrayals.

"The Merchant in German Literature of the Enlightenment is a meticulously researched and elegantly written study of what emerges as a palpable trend in literature's depiction of its middle class readers. Both specialists and novices may invest their time with profit."--Colloquia Germanica