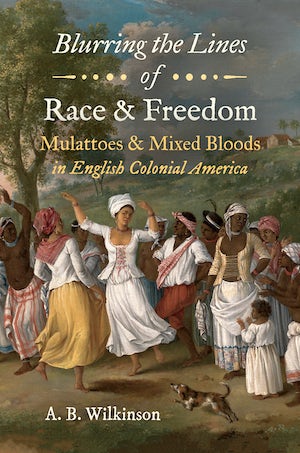 The history of race in North America is still often conceived of in black and white terms. In this book, A. B. Wilkinson complicates that history by investigating how people of mixed African, European, and Native American heritage—commonly referred to as "Mulattoes," "Mustees," and "mixed bloods"—were integral to the construction of colonial racial ideologies. Thousands of mixed-heritage people appear in the records of English colonies, largely in the Chesapeake, Carolinas, and Caribbean, and this book provides a clear and compelling picture of their lives before the advent of the so-called one-drop rule. Wilkinson explores the ways mixed-heritage people viewed themselves and explains how they—along with their African and Indigenous American forebears—resisted the formation of a rigid racial order and fought for freedom in seventeenth- and eighteenth-century societies shaped by colonial labor and legal systems.

As contemporary U.S. society continues to grapple with institutional racism rooted in a settler colonial past, this book illuminates the earliest ideas of racial mixture in British America well before the founding of the United States.

A. B. Wilkinson is associate professor of history at the University of Nevada, Las Vegas.
For more information about A. B. Wilkinson, visit the Author Page.

"This valuable work expands the understanding of the development of "racial" ideas in the colonial period, provides insight into how and why concepts of "race" and "mixed-race" continued and developed into the 19th and 20th centuries, and encourages readers to understand and celebrate American diversity. . . . Highly recommended."--CHOICE Reviews

"Readers of this book will value Wilkinson’s engagement with his sources and his engrossing, overarching narrative to make sense about how ideas about racial mixture were not simply invented, but rather reified in everyday exchanges, language, labor systems, and legislation. . . . [His] timely and thoroughly engaging analysis deftly narrates the calcification of racial hypodescent ideology, white supremacy and institutionalized racism’s entrenchment in nearly all aspects of society, while effectively reinforcing that the unnaturality of racism and racial inequality are historically contingent and flexible."--Journal of Social History

"This is a superior book. Most histories of mixed-race communities focus on the nineteenth or twentieth centuries, and Wilkinson's attention to the prerevolutionary period is a much-needed addition."--Gary Nash, University of California, Los Angeles

"In this deeply researched and readable book, A. B. Wilkinson effectively complicates monoracial categorizations in British colonial America for people of combined African, Indigenous, or European descent. Blurring the Lines of Race and Freedom foregrounds the perspectives of mixed-heritage people who strove for freedom, faced the criminal justice system, and navigated the social positions assigned to them in a society increasingly reliant on racial hypodescendence. A must-read for anyone interested in the historical background of the one-drop rule or the ongoing effect of racism in U.S. history."--Sharon Block, University of California, Irvine