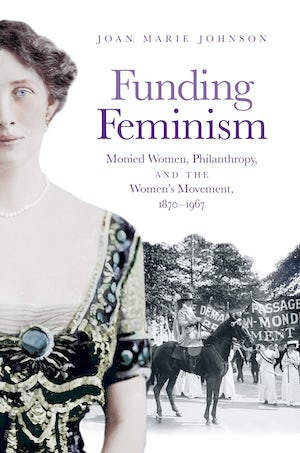 Joan Marie Johnson examines an understudied dimension of women’s history in the United States: how a group of affluent white women from the late nineteenth through the mid-twentieth centuries advanced the status of all women through acts of philanthropy. This cadre of activists included Phoebe Hearst, the mother of William Randolph Hearst; Grace Dodge, granddaughter of Wall Street “Merchant Prince” William Earle Dodge; and Ava Belmont, who married into the Vanderbilt family fortune. Motivated by their own experiences with sexism, and focusing on women’s need for economic independence, these benefactors sought to expand women’s access to higher education, promote suffrage, and champion reproductive rights, as well as to provide assistance to working-class women. In a time when women still wielded limited political power, philanthropy was perhaps the most potent tool they had. But even as these wealthy women exercised considerable influence, their activism had significant limits. As Johnson argues, restrictions tied to their giving engendered resentment and jeopardized efforts to establish coalitions across racial and class lines.

As the struggle for full economic and political power and self-determination for women continues today, this history reveals how generous women helped shape the movement. And Johnson shows us that tensions over wealth and power that persist in the modern movement have deep historical roots.

"This compelling work of original and much-needed research [will] be of interest not only to those who study the history of feminist activism but to those with an interest in the power that private money wields in social justice circles."--Library Journal starred review

“Details both the successes attributed to the contributions of monied women and the challenges their philanthropy posed to the early women’s movement, arguing that stark class differences bred resentment among women’s organizations and undermined cross-class coalition.”--Choice

"A riveting new vantage point on the fight for women's rights in the twentieth century. . . . The scope of Johnson's book is as generous as the narrative is nuanced and compelling."--Reviews in American History

“Johnson makes a careful and persuasive case that a cluster of wives and daughters of major railroad, real estate, manufacturing, banking, and mining magnates used their inheritances to create opportunities for their ‘sisters’ in a sexist world.”--American Historical Review

“Johnson’s book is a strong reminder of the progress that women have made in the past 150 years, and I believe it will fuel awareness about the need for more women to give major gifts for gender equality today.”--Kiersten Marek, Philanthropy Women

“Offers an important and accessible. . . contribution to both academic and lay audiences interested in women’s history in America, philanthropy, and indeed, select social change movements led by prominent women over the course of nearly 100 years.”--New York Journal of Books