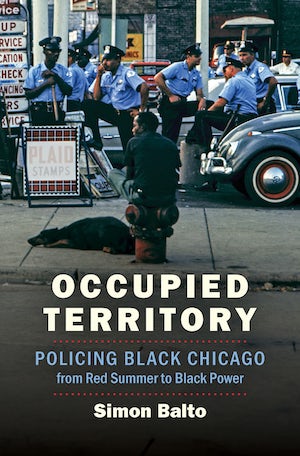 In July 1919, an explosive race riot forever changed Chicago. For years, black southerners had been leaving the South as part of the Great Migration. Their arrival in Chicago drew the ire and scorn of many local whites, including members of the city’s political leadership and police department, who generally sympathized with white Chicagoans and viewed black migrants as a problem population. During Chicago’s Red Summer riot, patterns of extraordinary brutality, negligence, and discriminatory policing emerged to shocking effect. Those patterns shifted in subsequent decades, but the overall realities of a racially discriminatory police system persisted.

In this history of Chicago from 1919 to the rise and fall of Black Power in the 1960s and 1970s, Simon Balto narrates the evolution of racially repressive policing in black neighborhoods as well as how black citizen-activists challenged that repression. Balto demonstrates that punitive practices by and inadequate protection from the police were central to black Chicagoans’ lives long before the late-century "wars" on crime and drugs. By exploring the deeper origins of this toxic system, Balto reveals how modern mass incarceration, built upon racialized police practices, emerged as a fully formed machine of profoundly antiblack subjugation.

Simon Balto is assistant professor of history and African American studies at the University of Iowa.
For more information about Simon Balto, visit the Author Page.

“A compelling regional case study of the Chicago Police Department’s vexed relationship with the African American community dating back to at least the 1910s and extending through the 1970s.”--Journal of African American History

“Chronicles the history of police violence and resistance in Chicago from the Red Summer of 1919 to the 1970s, a period when the groundwork for mass incarceration was being laid. . . . Until the appearance of Occupied Territory, little had been written about policing in twentieth-century Chicago, one of the most populous and heavily policed cities in the country, and thus Balto’s book is a welcome addition to this body of scholarship.”--Chicago Review

“One of the many reasons why Balto’s book is so crucial is the way that he demonstrates how Black Chicagoans have resisted CPD repression for as long as it has existed, from the NAACP and Chicago Freedom Movement to the Black Panthers to We Charge Genocide. . . . Balto’s book is an essential hundred-plus year history.”--South Side Weekly

“With scrupulous archival detail and sharp analytic focus. . . . Balto has produced a major work of history, forcing us to reimagine the political geography of the carceral state in ways that will be essential for any transformative and more just future.”--The Metropole

"Simon Balto’s study of twentieth-century black Chicago provides new insights into the historical roots of police abuse in black communities while challenging scholarship that posits the mid-twentieth century as a turning point for deteriorating relationships between the police and black Americans. This beautifully written history is a model of clarity and moral passion."--Beryl Satter, author of Family Properties: How the Struggle over Race and Real Estate Transformed Chicago and Urban America

"The last several years have seen important histories written about the rise of mass incarceration in the United States, but what has been missing are studies that deepen our understanding of American policing. Simon Balto offers a much-needed history of policing in Chicago, clearly articulating the connection between the Chicago Police Department’s record of racism and abuse and its contemporary crisis of police brutality."--Keeanga-Yamahtta Taylor, author of Race for Profit and From BlackLivesMatter to Black Liberation