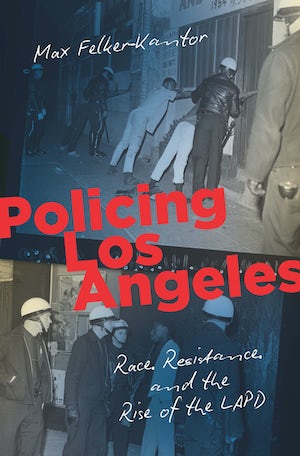 When the Los Angeles neighborhood of Watts erupted in violent protest in August 1965, the uprising drew strength from decades of pent-up frustration with employment discrimination, residential segregation, and poverty. But the more immediate grievance was anger at the racist and abusive practices of the Los Angeles Police Department. Yet in the decades after Watts, the LAPD resisted all but the most limited demands for reform made by activists and residents of color, instead intensifying its power.

In Policing Los Angeles, Max Felker-Kantor narrates the dynamic history of policing, anti–police abuse movements, race, and politics in Los Angeles from the 1965 Watts uprising to the 1992 Los Angeles rebellion. Using the explosions of two large-scale uprisings in Los Angeles as bookends, Felker-Kantor highlights the racism at the heart of the city's expansive police power through a range of previously unused and rare archival sources. His book is a gripping and timely account of the transformation in police power, the convergence of interests in support of law and order policies, and African American and Mexican American resistance to police violence after the Watts uprising.

“The attention paid in Policing Los Angeles to liberal law and order is particularly valuable to current discussions of mass incarceration, the school-to-prison pipeline, and the militarization of police . . . Felker-Kantor also demonstrates impressive archival breadth.”--H-Net Reviews

“[Felker-Kantor’s] coverage of major issues facing the [LAPD] between the 1960s and 1990s is fairly comprehensive, as is his exploration of community organizing around police accountability. . . . As historical scholarship on the criminal-justice system evolves, Policing Los Angeles serves as a model for police history and points to directions yet taken.”--Journal of Arizona History

"A richly researched study, this book should be read by anyone hoping to understand the intensity of policing in Los Angeles since the 1965 Watts Rebellion. Using new archival finds, it is a page-turning chronicle of race, capitalism, and state violence in the heart of the city."--Kelly Lytle Hernández, author of City of Inmates: Conquest, Rebellion, and the Rise of Human Caging in Los Angeles

"A deft combination of political and social history, Policing Los Angeles adds rich depth to the emerging histories of the expanding carceral state in the second half of the twentieth century. With the LAPD as subject, this book is at once a local and a national story of urgent significance."--Dan Berger, University of Washington Bothell

"Policing Los Angeles vividly captures--better than any other book on the market--both the rise of modern police power and the emergence of a social movement strong enough to challenge it."--Christopher Agee, University of Colorado Denver