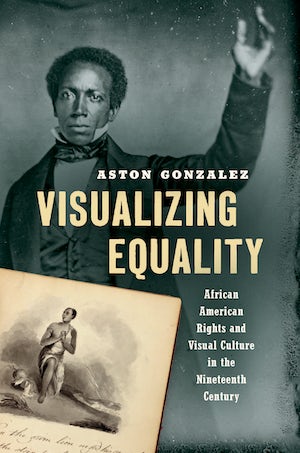 Finalist, 2021 Association for the Study of African American Life and History Book Prize

The fight for racial equality in the nineteenth century played out not only in marches and political conventions but also in the print and visual culture created and disseminated throughout the United States by African Americans. Advances in visual technologies--daguerreotypes, lithographs, cartes de visite, and steam printing presses--enabled people to see and participate in social reform movements in new ways. African American activists seized these opportunities and produced images that advanced campaigns for black rights. In this book, Aston Gonzalez charts the changing roles of African American visual artists as they helped build the world they envisioned.

Understudied artists such as Robert Douglass Jr., Patrick Henry Reason, James Presley Ball, and Augustus Washington produced images to persuade viewers of the necessity for racial equality, black political leadership, and freedom from slavery. Moreover, these activist artists’ networks of transatlantic patronage and travels to Europe, the Caribbean, and Africa reveal their extensive involvement in the most pressing concerns for black people in the Atlantic world. Their work demonstrates how images became central to the ways that people developed ideas about race, citizenship, and politics during the nineteenth century.

Aston Gonzalez is assistant professor of history at Salisbury University.
For more information about Aston Gonzalez, visit the Author Page.

"Extends the prehistory of the Black Arts movement–as well as the Harlem Renaissance—to a critical period in the middle of the nineteenth century, when imagery was central to the fight against slavery. . . . Illuminates a vital period in the development of African American visual culture."--Black Perspectives

"Visualizing Equality successfully demonstrates how early African American visual artists developed ideas and practices of image making linked to politics impacted by their understanding of the intersections of race and images. Meticulously researched, Gonzalez’s text focuses our attention on Black artists empowered by their positions as activists in free Black communities in the North."caa.reviews

“[Gonzalez] narrows his lens to offer rich biographies of his leading characters, opens the aperture to reveal the local contexts and activist networks in which they worked, and then widens it further to show the transnational reach of their work.” --The North Carolina Historical Review

"This is an indispensable, pathbreaking book. The writing is crisp and clear, the research is broad and deep, and the conclusions are ramifying and resounding. Thanks to Aston Gonzalez, we have an authoritative examination of black artists, lithographers, and photographers in nineteenth-century American and Atlantic society that deepens our understanding of the uses and meaning of black visual culture."--Richard Newman, Rochester Institute of Technology

“In 1855, Frederick Douglass declared, ‘I must speak just the word that seemed to me the word to be spoken by me.’ Over 150 years later, Aston Gonzalez’s inspirational study, Visualizing Equality, bears witness to black image-makers’ insistence that they ‘must visualize just the image that seemed to them the image to be visualized by them.’ A call to arms, Gonzalez’s trailblazing history of black activist-artists’ radical and revolutionary practices of reclamation, re-creation, and reimaging testifies to their endorsement of the ‘power of images’ as a weapon of liberation in the ‘battle for black rights.’ For the first time, Gonzalez does hard-hitting justice to the lives and works of black artists who sacrificed, struggled, and survived not only to visualize but to create and re-create ‘the world they envisioned.’”-- Celeste-Marie Bernier, University of Edinburgh