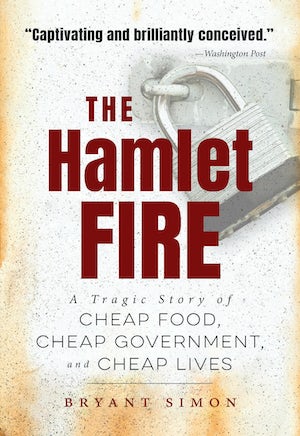 For decades, the small, quiet town of Hamlet, North Carolina, thrived thanks to the railroad. But by the 1970s, it had become a postindustrial backwater, a magnet for businesses in search of cheap labor and almost no oversight. Imperial Food Products was one of those businesses. The company set up shop in Hamlet in the 1980s. Workers who complained about low pay and hazardous working conditions at the plant were silenced or fired. But jobs were scarce in town, so workers kept coming back, and the company continued to operate with impunity. Then, on the morning of September 3, 1991, the never-inspected chicken-processing plant a stone’s throw from Hamlet’s city hall burst into flames. Twenty-five people perished that day behind the plant’s locked and bolted doors. It remains one of the deadliest accidents ever in the history of the modern American food industry.

Eighty years after the Triangle Shirtwaist Fire, industrial disasters were supposed to have been a thing of the past in the United States. However, as award-winning historian Bryant Simon shows, the pursuit of cheap food merged with economic decline in small towns across the South and the nation to devalue laborers and create perilous working conditions. The Hamlet fire and its aftermath reveal the social costs of antiunionism, lax regulations, and ongoing racial discrimination. Using oral histories, contemporary news coverage, and state records, Simon has constructed a vivid, potent, and disturbing social autopsy of this town, this factory, and this time that exposes how cheap labor, cheap government, and cheap food came together in a way that was destined to result in tragedy.

Bryant Simon is a professor of history at Temple University.
For more information about Bryant Simon, visit the Author Page.

"Engaging and humanizing. . . . [Simon] uses the horrific event of a devastating accident at a chicken-processing plant in rural North Carolina to examine the consequences of the modern American convenience diet, where everything is expendable."--Booklist

"The Hamlet Fire is infinitely, if painfully, readable. Simon is at turns abrupt and poetic, thoughtful and resolved. There is much that students of history can learn from Simon’s book that applies to southern food processing today."--American Historical Review

"The Hamlet Fire provides a fresh approach to the crowded field of food history, encouraging us to consider the interconnections between consumer demand, the evolution of the American diet, and the hidden costs of deregulation."--Journal of Social History