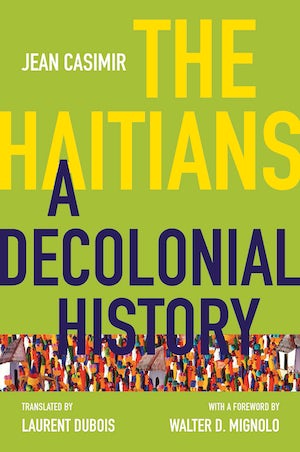 In this sweeping history, leading Haitian intellectual Jean Casimir argues that the story of Haiti should not begin with the usual image of Saint-Domingue as the richest colony of the eighteenth century. Rather, it begins with a reconstruction of how individuals from Africa, in the midst of the golden age of imperialism, created a sovereign society based on political imagination and a radical rejection of the colonial order, persisting even through the U.S. occupation in 1915.

The Haitians also critically retheorizes the very nature of slavery, colonialism, and sovereignty. Here, Casimir centers the perspectives of Haiti's moun andeyo—the largely African-descended rural peasantry. Asking how these systematically marginalized and silenced people survived in the face of almost complete political disenfranchisement, Casimir identifies what he calls a counter-plantation system. Derived from Caribbean political and cultural practices, the counter-plantation encompassed consistent reliance on small-scale landholding. Casimir shows how lakou, small plots of land often inhabited by generations of the same family, were and continue to be sites of resistance even in the face of structural disadvantages originating in colonial times, some of which continue to be maintained by the Haitian government with support from outside powers.

Jean Casimir, who served as Haitian ambassador to the United States and as a United Nations official, is professor of humanities at the University of Haiti; his most recent book is Haïti et ses élites.
For more information about Jean Casimir, visit the Author Page.

Laurent Dubois is professor of romance studies and history at Duke University; his most recent book is Freedom Roots: Histories from the Caribbean.
For more information about Laurent Dubois, visit the Author Page.

Walter D. Mignolo is William H. Wannamaker Professor of Romance Studies in Trinity College of Arts and Sciences and Professor of Literature at Duke University. He is author or editor of several books, including The Darker Side of Western Modernity: Global Futures, Decolonial Option.
For more information about Walter D. Mignolo, visit the Author Page.

"Asks us to reorient our perspectives away from the colonizers and the state in Haiti and instead to look to the Haitian people to evaluate the 'success' of the Haitian Revolution. . . . By centering the worldview of the rural population in the nineteenth century—the 'True Haitians'—Casimir shows us the possibilities of alternative forms of freedom that reject the legacies of colonialism and slavery."--Age of Revolutions

"Reinterprets Haiti’s postcolonial history to resurface ways of being, knowing, and existing outside of dominant Western conceptual categories. . . . Anglophone readers are now able to access a capacious and new approach to Haitian—and global—history, written by a leading Haitian scholar."--Public Books

"[Casimir] re-theorizes slavery in Haiti by asking how Africans—living at the apex of European imperialism—were able to instigate a successful revolution and sustain a sovereign state. . . . He provides a sweeping historical narrative. . . . Highly recommended."--Choice Reviews

"Casimir unapologetically aims to use scholarship to advance the cause and collective agency of the sovereign people of Haiti, rather than using the case study of formerly colonised populations to singularly advance intellectual discourse." —Journal of Latin American Studies

“A landmark in the history of colonialism, slavery, and emancipation in the Atlantic World. . . . Nearly every sentence of this book carries enough analytical weight to support a monograph of its own.”—Journal of Early American History

“Prominent Haitian diplomat and writer Jean Casimir offers students and scholars of the Caribbean a corrective to some prevalent depictions of Haiti. . . . [H]e investigates the resilience and perspectives of those enslaved people who defeated imperialism and the way their descendants defied diplomatic and financial impositions.”—New West Indian Guide