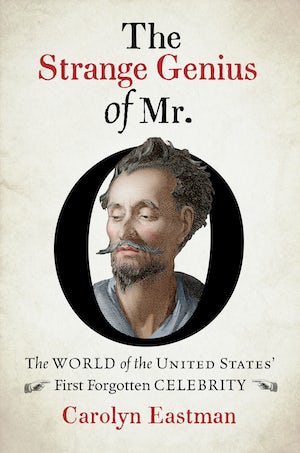 When James Ogilvie arrived in America in 1793, he was a deeply ambitious but impoverished teacher. By the time he returned to Britain in 1817, he had become a bona fide celebrity known simply as Mr. O, counting the nation’s leading politicians and intellectuals among his admirers. And then, like so many meteoric American luminaries afterward, he fell from grace.

The Strange Genius of Mr. O is at once the biography of a remarkable performer--a gaunt Scottish orator who appeared in a toga--and a story of the United States during the founding era. Ogilvie's career featured many of the hallmarks of celebrity we recognize from later eras: glamorous friends, eccentric clothing, scandalous religious views, narcissism, and even an alarming drug habit. Yet he captivated audiences with his eloquence and inaugurated a golden age of American oratory. Examining his roller-coaster career and the Americans who admired (or hated) him, this fascinating book renders a vivid portrait of the United States in the midst of invention.

Carolyn Eastman is associate professor of history at Virginia Commonwealth University and the author of the prizewinning A Nation of Speechifiers: Making an American Public after the Revolution.
For more information about Carolyn Eastman, visit the Author Page.

"Who was James Ogilvie? In a page-turning book that reads more like a mystery novel than the work of a professional historian, Carolyn Eastman reconstructs not just a forgotten life of celebrity but a forgotten world of the early United States. Through her artful telling, we learn how a young public's earnest desire for self-improvement combined with a singular man's oratorical genius and media talent to fuse education, religion, politics, and hucksterism into an indistinguishable cultural brew. With a keen eye--and with great wit and archness--Eastman pulls these and other strands apart even as she shows their impossible interconnections in American culture. It is a rare work of history that speaks to both past and present."--François Furstenberg, author of When the United States Spoke French: Five Refugees Who Shaped a Nation

"Eastman's stunning archival research brings James Ogilvie, a melancholy man once celebrated as a stage orator, back to life. With deft analysis and lovely prose, she offers new insights into the aspirations of Americans who lived through the republic’s first tumultuous decades."--Ann Fabian, author of The Skull Collectors: Race, Science, and America’s Unburied Dead

"In her highly imaginative and richly documented work, Carolyn Eastman takes us through the early Republic's towns and cities as she explores an itinerant lecturer's talent for eloquence. Traveling a nation in the midst of self-invention, Mr. O spoke on behalf of a republic bound together by democratic deliberations. His experience began with the popularity and fame that came to define celebrity and concluded abruptly with the public disenchantment that ended Mr. O's career. A tour de force, Strange Genius is a tale for our own time."--Mary Kelley, author of Learning to Stand and Speak: Women, Education, and Public Life in America's Republic